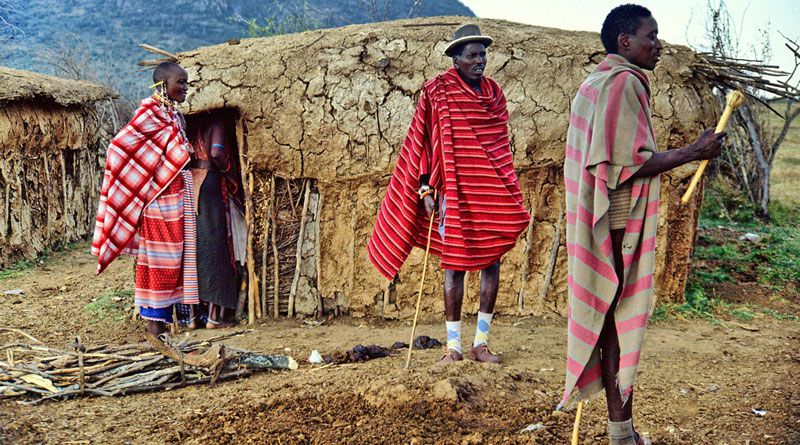 They are, arguably, one of the oldest ethnic communities and have kept their culture intact for more than a century.

We are talking of the Masai people of Kenya and Tanzania.

Primarily found in the jungle of the Masai Mara National Reserve in Kenya, the Masai people are a pastoral community that has co-existed with wildlife for decades.

1 Lions are some of the players within the Mara Ecosystem

As a result, all facets of their lives are a far cry from modernity. From their mode of dress, dietary habits, culture to medicine.

In this article, we explore the Masai lifestyle and its impact on the community’s health.

We also find out why, despite their high cholesterol intake, the Masai people defy science by being some of the healthiest humans around.

An overview of the remarkable Masai people

In an attempt at understanding how these mysterious people acquire good health,  we looked at the different areas of their lives and the attributes that make them so unique.

A typical day for the Masai begins in the morning when the men leave their homesteads to herd cattle in the wild.

The Masai place a very high premium on their cattle and can even risk life and limb fighting Lions and other predators to ensure their livestock’s safety.

On their part, the wildlife gives Masai men a wide berth due to their propensity to slay any animal that threatens the precious cows.

One of the elements that the men use to intimidate predators is by dressing in red kangas (loose garments). They also whistle while in the wild to alert the wild animals of their presence.

Under this odd begrudging respect, the predators keep their distance and hunt for the wild game from among the throngs of non-domesticated herbivores populating the reserve.

You may like:  Factors influencing hair transplant cost in India

Tales of the Masai may seem too incredulous to be true. The good news however, is that you can take a cultural tour into the Mara savannah and experience their culture first hand.

What to Expect on a Cultural Tour to a Masai Village

It is the women’s duty to build the Manyattas.

Given their nomadic lifestyle, Manyattas are makeshift homes, made from twigs, mud and cow dung, and house individual families.

On your visit, expect to meet families adorned in elaborate and intricate beadwork.

The Masai are particularly passionate about song and dance, which is one of their favorite pastimes.

On your visit, the Morans will be sure to throw in a dance or two for your enjoyment.

For an even greater adventure, masai mara safari package to coincide with the annual wildebeest migration. The event sees over 2 million wildebeest migrate from the Serengeti National Park to Kenya’s Masai Mara Game Reserve. It is so dramatic that in 2007, it was named one of the 8 wonders of the world.

Back to the Masais, as we shall see shortly, cows are a critical contributor to a Masai’s nutritional and medicinal needs.

On a regular day, the Maasai eat Ugali (a hardened porridge made of cornmeal cooked with hot water).

The Ugali is accompanied by an assortment of greens fetched from the bush, which the women cook.

They also partake of a solution consisting of cows’ milk and blood, a definite boost in iron and calcium.

On special occasions, the Masai slaughter one of their cattle and partake of the meat, mostly roasted over an open fire.

On average, a Masai man consumes anywhere between 600- 2000mg of cholesterol daily.

Their daily cholesterol intake is more than the recommended amounts of 300mg of cholesterol per day.

You may like:  The Importance Of Assessing Your Property's Value

Notwithstanding the greens and Ugali, the Masai diet is heavy in animal proteins.

Yet despite all this, Masai men have been shown to record incredibly low levels of blood cholesterol.

Details of this research can be accessed from data gathered by the International HapMap Project.

According to the data, the Masai people not only showed low cholesterol levels, but they also recorded low incidences of coronary heart diseases.

These are diseases such as atherosclerosis and cholesterol gallstones.

Also, bear in mind that aside from their high animal protein diet, health facilities are few and far between in the African bush.

So, what makes the Masai rank so highly in terms of health in the face of these odds?

Well, for starters, their pastoral way of life often means they have to walk vast distances daily.

Consequently, the Masai people wind up only consuming an average of 50-70% of their daily energy requirements.

That means they are always operating at a caloric deficit, which explains their lean bodies and low Body Mass Index (BMI).

Another reason advanced for the Masai’s robust health ranking is their manner of dealing with illnesses.

On the main, the Masai people depend on traditional herbal remedies to cure their maladies.

Masai herbal cures are derived from shrubs, roots, and bark of trees and are employed on a wide range of ailments.

According to research conducted by the School for Field Studies, Center for Wildlife Management Studies in Kenya, the Masai use over 40 different plant species as medicine.

These plants cater to many ailments, from mild ones such as stomach aches and diarrhea to more serious ones such as STDs, arthritis, and lung problems.

Off-grid living seems to reap dividends for the Masai. The health of members of this enigmatic Kenyan tribe defies contemporary scientific explanation.

On a trip to the Masai Mara, you can not only witness the marvels of Kenya’s wildlife, but you also get first-hand encounters with these incredible people of the Mara.