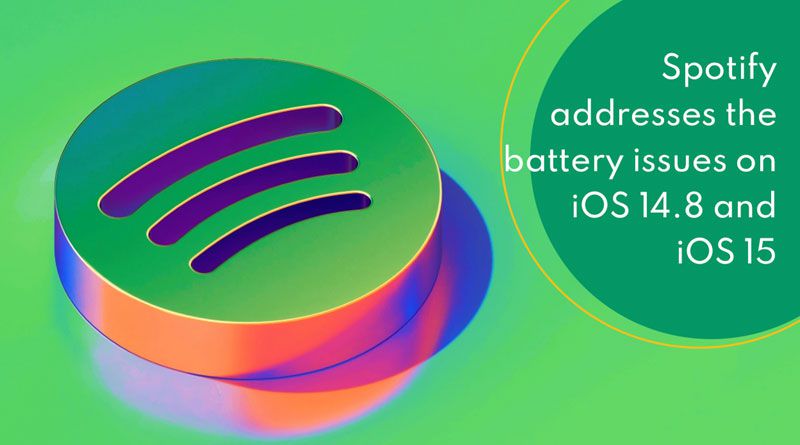 Spotify is one of the most popular music streaming applications. Users can access millions of songs in just a few clicks. The app is ideal for music enthusiasts and has multiple exciting features such as customized playlists to make sure users always have something to listen to. It is also home to multiple podcasts.

Nevertheless, there seems to be an issue lately with the streaming platform. The app seems to be adversely affecting the battery life on iPhones that run on iOS 14.8 and iOS 15.

Spotify has recognized that their app may be causing severe battery drain and overheating concerns on iOS 14.8 and the current iOS 15 upgrade, promising a remedy in the not-too-distant future in response to a slew of reports and complaints.

Spotify says it is aware of battery drain reports and has passed them on to its technical iOS team in a lengthy and ongoing support thread on its website that began weeks ago. The messages shared voice extreme distress about the predicament. Spotify hasn’t said when a fix will be available, or whether it will be in the form of an app update or other troubleshooting methods.

You may like:  Should you go for a Refurbished Mac?

Spotify is listed as a battery drainer due to background activity, according to users who have reported the issue on the thread, with no explanation as to why. While the majority of reports come from iOS 14.8 and iOS 15.0 users, there are also reports of battery drain on older iOS versions. Users are encouraged to update to take advantage of a potential patch and improved security.

For now,  Spotify is being blamed for the excessive draining, it’s also possible that some users are experiencing a bug in iOS 15. Apple has promised fixes for several bugs in iOS 15, including one that limits Apple Watch functionality with the newly released iPhone 13, as well as issues with Apple Music and other bugs. Apple could release iOS 15.0.1 as soon as this week to address those and other issues.