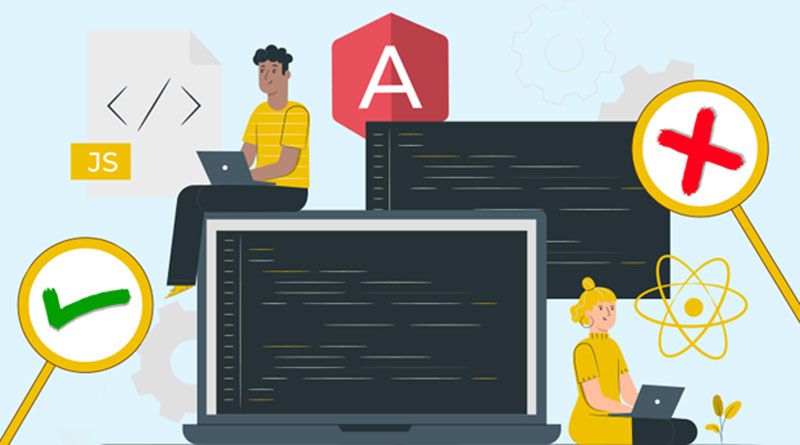 According to a survey from Stack Overflow, Angular JS is the third most preferred web framework. As technology continues to upgrade, developers across the globe are trying to improve the current technology. However, that doesn’t mean Angular JS will not give you sleepless nights. To rip the complete range of benefits of the framework, you need to get used to the common mistakes and avoid making them.

Here are the top 11 mistakes you should avoid –

i. Failing to unsubscribe

Angular JS developers often use subscriptions for events in the application. However, the problem begins when they forget to unsubscribe. This results in memory leaks in the entire system. In addition, continuous new subscriptions are a risk to data security.

Developers use jQuery for developing mobile and web applications. It is a standard library that allows developers to manipulate DOM. However, when it comes to Angular JS, jQuery is not the ideal solution.

Angular JS developers often forget this simple fact. Angular JS itself has many features that can adequately solve problems by using third-party libraries. Thus, jQuery is not needed when it comes to solving issues in Angular.

iii. Unable to use available tools

Some of the familiar tools whose knowledge is necessitated are Protractor and Test Whiz. And if the company hires a developer who can not employ these tools, it will be an expensive mistake as applying these tools is required.

When a developer operates with Angular, the essential issue is distributing codes into smaller components to make error tracking a smooth task. But not all developers can do that. And one of the reasons behind it is that AngularJs works with MVC structure, and it has the tendency to place a large quantity of coding elements at the controller.

As an AngularJS developer, organising your codes is the essential thing to do, and this is where top professionals end up forming a miscalculation. The entire development life cycle involves the equal distribution of codes into small cubicles or compartmentalising. As a result, it becomes way effortless to track things down ( errors) and work decently on each one of them.

v. Endorsing the same component in every ngModule

One of the most frequent mistakes that AngularJs developers make is declaring the same component in multiple NGModule-s. The reason behind it’s that they need to declare each component in its own NgModule, and to make it available for the views, it must list it in the @Ngmodule.declarations array.

The developers forget that if they want to declare the identical component in multiple modules, they must reckon the association between the modules. For example, they should see that the modules have a parent-child relationship with each other.

Directly altering the DOM is the mistake Angular development service providers often make. However, as we know that changing the DOM is a usual function. While the developers are using the JavaScript platform, they should take care of the following things –

The list of these possibilities may go on as per the requirement of the system or the working manner of the system. Consequently, whenever a developer finds such situations in the platform, they should instantaneously find an effortless escape and manipulate the DOM. And if the developer does not want to change the DOM directly, they can apply jQuery as a global document object.

vii. Making use of client-side pagination

Data rendering helps the Angular development organisations maintain the representation of bulk data in the app. However, when they apply client-side pagination for the maiden time, they have to load the entire data of the application. Consequently, if the data is less, then loading is easy, but if it is more then, it becomes laborious to load the data. The other option for this is server-side pagination.

You may like:  Top AngularJS Tips and Tricks for Your Web Development

A single irrelevant commit message can sometimes alter the entire code as it can mislead the code reviewers. Additionally, it remains correspondingly challenging for the AngularJs developers to find the specific part where they need to revert the new alterations.

Therefore, It would be best for the developers to avoid giving irrelevant commit messages and not to forget to follow proper standards from git.

The developers overlook examining the application before launching. It’s one of the most common mistakes that Angular JS developers fabricate. They don’t see to it that there might exist bugs that get found by many environments. Consequently, they don’t have to obtain an environment with each operating system. But they require to examine the app by employing cross-browser app testing tools.

As an Angular developer, you need to understand that reviewing is as significant as developing something. Strange and unexpected bugs are found only when they are tested in different environments.

xi. Improper use of event handlers

Angular is one of the best technologies for developers requiring to add the functionalities they found on predicted data, such as adding a button that depends on user input. However, the standard rule of the Angular framework is to place all the logic and display it in the proper order. As a result, this doesn’t go with the traditional rules of the Angular framework.

Companies are constantly under pressure to meet customer deadlines. This can force the developers to give an excessive number of assignments for the controllers to perform and blend rational layers, bringing about a code intended to execute much more within a given situation.

Making Misjudgments while coding is very usual with any developer. However, sometimes it happens that developers write the code, and when they check it after several days, they can point out various slipups in it. But the challenge arises when the developer cannot detect their mistakes, and later the end-users face challenges in using the application. Hence, avoiding the above-listed mistakes and being additionally alert while creating and debugging an app can help the AngularJs developers. If you are learning Angular through AngularJS tutorial, this is an excellent time to understand what mistakes are not to be made.