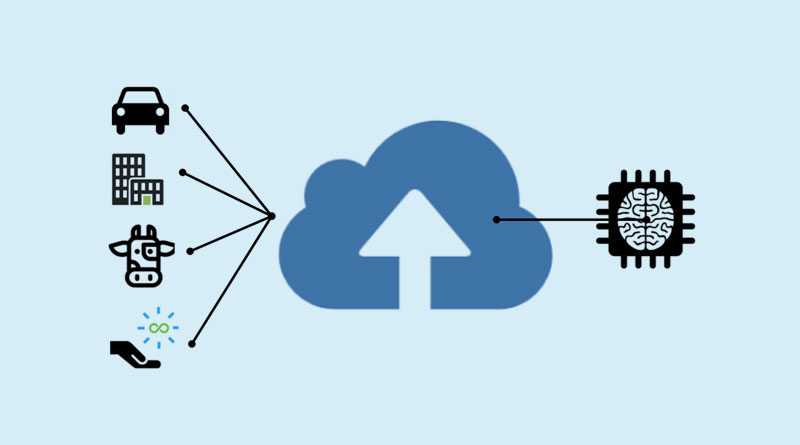 Governments around the world are allocating significant amounts of time, money and support to the deployment of 5G infrastructure. There’s a reason for that. 5G is not just faster data. 5G is a complete rewrite of everything we have come to expect from mobile phone infrastructure and the impact on almost every area of our lives is going to be unmissable.

Importantly, 5G will overlap with Artificial Intelligence. 5G will create a need for even more of our information to be available in the cloud. It will also create a platform to enable that. As is often the case, each technology will re-enforce the other.

Above Photo: The technical capabilities of 5G mean that a lot more data will be available in the cloud.

Some 5G use casesto explain what all the fuss is about

Self driving cars, are one of the most common examples of 5Gof how 5G will manifest in real life. Ericsson, the networking company estimate that, over a 4G connection it would take a car, travelling at 60 miles per hour around 240 meters to stop in the even that it sensed an obstacle. With 5G, it will take only 2.8 cm.

Cars are just one example of how 5G will connect more things to the internet. One of the key features of 5G, low power consumption for units connected to the network, will facilitate an explosion of the number of connected devices. A simple sensor will be able to connect farmyard animals, buildings and almost literally every physical object in the world worth more than about $100 to the internet. All the data from these devices will be stored in the cloud.

I remember talking to journalists when I was the BlackBerry Product Manager for a phone company, a decade ago. Smartphones adoption rates were growing at 70% per year, a level of increase very similar to forecast 2018 increase in uptake we are seeing for internet connected wearables, The number of connected devices is increasing exponentially – and with 5G, data from all of them will be centrally housed.

You may like:  How to apply for Aadhar card?

And here comes Artificial Intelligence (AI) at the same time

Artificial intelligence is understood. Even the most advanced AI systems perform a task which is most easily understood as ‘pattern matching’ – something humans do every day without thinking – when they try to understand a sentence which has been said to themor try to cross a road.

Using a technique known as ‘back propagation’, AI systems take a number of inputs and associate them with a common output. They might, for example, be shown pictures of 10,000 cats. Through clever mathematical relationships, back propagation allows computers to ‘learn’ whether the picture it is looking at is a cat.Google taught a computer the board game ‘Go’ in an afternoon by providing it every game ever played in a structured way so it could spot the patterns.

The science of back propagation has been around for 30 years and the algorithms used to establish patterns have not changed substantively in that time. The major blocking point on the road to using AI to solve more problems is the ready availability of data. When 5G puts more of it in the cloud, AI will quickly manage the patterns.

Tying AI and 5G together

There’s a story about a man who dropped his keys at night in the street.To find them, he looked under the streetlights. Where else would he see them ? In reality, many of the problems we try and solve now, are as constrained as that man was. We don’t have the information we need to get to the root of the problem.

You may like:  How to Choose the Best E-Commerce Theme for Your Online Business

Take your own health, for example. We walk around now knowing that one third of the people in our lives are going to suffer with cancer at some point in their life. What if every building and every car had a 5G connection and stored their data in the cloud. We may discover, by running an AI algorithm on the data they recorded, that a disproportionately high number of people who had contracted cancer had been in a particular part of town or driven to work down a particular road. We’d have a better chance to reduce cancer.

In some senses it’s the overlapping and intersection of the data points (the, cancer, travel history of sufferer) which will make it so valuable to us and that very factor which makes it so hard to predict. And 5G will provide an almost limitless number of those interconnections.

Bringing it all together

The effect of AI and 5G together on the economy are not hard to see.Both technologies will happen in multiple industries at once, shining a light on problems we could never previously solve.5G is not just the faster data that we have come to expect from every new network upgrade. It will fundamentally rewire our lives and help us solve problems we never thought we could.

Eliminate Your Fears And Doubts About Payday Loans

Impact of Cobots in the Workplace

Does the brand identity really matter? If yes, take a look to build your branding agency to the top