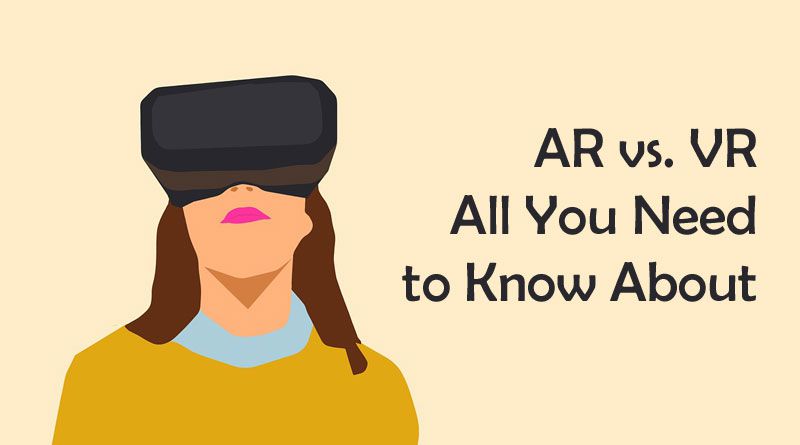 Two technologies are arousing arguments over their functionality and alikeness; the AR and VR. The techs came into the limelight recently, and the use of VR has grown sporadically.AR use, on the other hand, is quickly gaining momentum.

The conception of the technologies is traced back to 1838 when Charles Wheatstone invented the stereoscope.

There have been other technologies in the same line; Lenticular Stereoscope in 1849, The Link Trainer in 1929, Viewmaster in 1939, Sensorama in 1950, Telesphere Mask in 1960, and the Headlight in 1961. But it was in 1968, that Ivan Sutherland and Bob Sproull created the first real VR/AR stereoscopic camera.

Are There Differences between AR and VR?

Virtual reality and Augmented reality often misconstrued to be alike, have vast differences. Virtual reality intention is to make unreal events feel real.I.e You can have a feel or experience of any place in the world from your sitting room. Virtual reality is possible through 3-D technology and digital environments.

Users use Head Mounted Displays, that may be either connected to a PC or standalone sets. The headsets block you from seeing your surrounding environment or room and shift your focus to the new simulated environment. Users are so inundated with realism, and advanced VR systems enhance users experience through more sensory abilities, i.e., users can even walk in the new surroundings.

You may like:  Easy ways to Spot an Email Scam

Augmented reality, on the other hand, intends to enhance our existing environment.I.e it brings the virtual world into our current setting. It involves the addition of digital components and capabilities to the real world. Unlike VR, the user is not moved and stays in his current reality, and needs no headgears for effectiveness.AR is usable through mobile phone applications, AR-enabled headsets or glasses.

Similarities between AR and VR

The applications of AR and VR are also alike, while both models have been abundantly used in the film and gaming industries a lot, there is great anticipation for a more significant impact in the marketing and medicine fields. In medicine, both models offer the possibility of remote surgeries and are useful in the treatment of Post Traumatic Stress Disorder.

With the use of AR, it is possible to combine a phone’s camera with GPS, to provide clear navigation routes in transport channels.

Augmented reality is also applicable in the fields of medicine, especially surgery and in medical school training. The technology is usable together with X-ray systems for clarity and integration of all images into a single view. In Education, also provides students with information in multimedia formats. Frequent use is in the gaming world where users experience a real or virtual gaming experience.

You may like:  6 Things You Should Definitely Know About Node.Js

VR gives students in all fields an opportunity to experiment and practice in virtual environments. Capturing of concepts is more natural with virtual experiments. Companies like IKEA adopted  interactive 3d product animation in a virtual environment. Consumers in-turn get the feeling of their products before purchasing or manufacturing.

Virtual Nintendo, Cybermaxx, iGlasses, and the Virtual I-O are some of the gaming conceptions arising from Virtual Reality.

In 2016,” Gone” a VR movie thriller was produced. The movie was a Skybound production in collaboration with VR companies.VR, also applicable in tourism, where tourists can get a practical test of tourist destinations before booking travels.

If you think of the power of AI, combined with AR and VR; technology is going to revolutionize the world. Significant advancements are likely in education, i.e., e-learning growth and media. Some of the tech giants in TV and phones are already thinking of scrapping screens.

Other possible developments are the virtual acquisition of human resources, enhance eye and face tracking capabilities of systems which will automatically improve security systems efficiency.