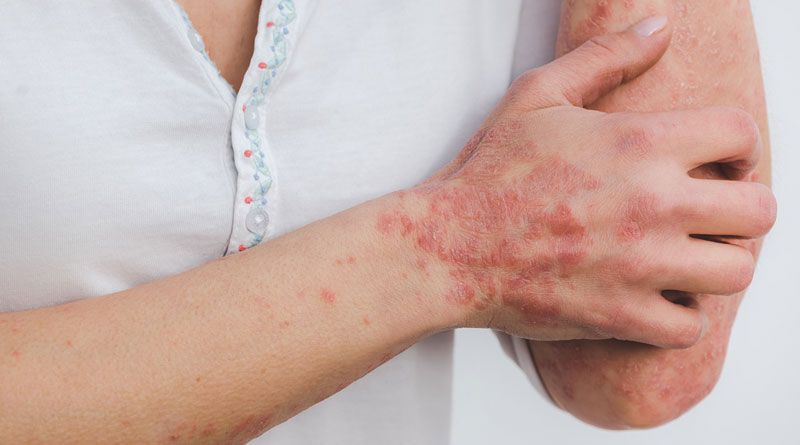 If you have psoriasis, then you are one of the 7.5 million Americans with this ailment, characterized by elevated, raw, itchy plaques and scales on your skin. Psoriatic disease is one of the most widespread skin conditions, yet there are still some misconceptions regarding its causes, symptoms, and available treatments. Those who don’t understand psoriasis often think it’s just dry skin or that it’s contagious, which are not true

In this article, we debunk the most common misconceptions about psoriasis. Let’s delve into them.

1. It is just a skin condition.

Some individuals with psoriasis just have a few plaques on their elbows and no other symptoms. However, psoriasis sufferers frequently also experience additional symptoms like scalp plaques and damaged nails. They may also suffer from psoriatic arthritis or other linked problems like cardiovascular disease. Many additional issues can accompany psoriasis, making it difficult to define it with a designation as finite as ‘just’ a skin disorder.

2. It looks the same on anyone.

According to the National Psoriasis Foundation, plaque psoriasis, the most prevalent form of the illness, affects up to 80% of those who have it (NPF). Plaque psoriasis presents as raised, scaly patches of skin and frequently affects the scalp, knees, elbows, and lower back. There are four more kinds of psoriasis, including erythrodermic psoriasis, pustular psoriasis, inverse psoriasis, and guttate psoriasis, all of which manifest as small, rounded spots on the skin (a rare, potentially life-threatening form that causes the skin to shed in large sheets).

You may like:  How to Create a Meal Plan?

This is also another damaging misconception regarding that is absolutely wrong. Psoriasis on nails is not contagious; unlike a rash your child may have acquired at school. Psoriasis cannot be transmitted from one person to another, although the general public may not be aware of this. The social stigma of psoriatic illness can be extremely lonely. Psoriasis patients frequently feel embarrassed to strip off at the beach or pool, and wearing shorts or shirts with short sleeves might be challenging. Fighting psoriasis misconceptions might be difficult for those who want to date and experience intimacy.

In addition, psoriasis cannot be spread through direct contact between people or through the exchange of bodily fluids, such as kissing or sharing foods or drinks. Additionally, others cannot spread it in crowded public spaces like saunas or swimming pools.

Psoriasis can be effectively treated using various methods. While it may take some trial and error to find the correct one for you, most sufferers of this condition eventually find a treatment that works for them. The success percentage usually relies on how severe the symptoms are. Topical medications, such as steroid creams and ointments, can effectively treat mild psoriasis; however, more severe cases require systemic medications, such as pills or injections. Phototherapy can also be quite successful, and immunotherapy with biologic drugs is an exciting new way that has significantly altered how we treat moderate to severe psoriasis. You can also ease symptoms by wearing best fabrics for psoriasis.

5. Psoriasis is caused by poor hygiene.

No. Food intolerances, allergies, and poor hygiene practices are not the main causes of psoriasis. Although stress can create a flare-up of psoriasis, it is not the primary cause of the condition. (Since stress can also trigger psoriasis flares, it can be challenging to say which comes first.) A psoriasis flare-up can result from catching a cold or having strep throat, [both of which trigger the immune system to react and overreact], medications, and occasionally cold weather. Some individuals can also discover that specific meals can trigger symptoms.

You may like:  A Guide to Cosmetic Dentists in Scottsdale

6. Psoriasis can be cured.

This condition cannot be cured currently. But unknown treatments exist for this persistent, lifelong illness known as psoriasis. People now have several alternatives for managing psoriasis symptoms and indications because of new options and better-established treatments.

New, potent biological medications that target the critical immune system components responsible for the illness have been developed as a result of a study into the immune system’s role in causing psoriasis.

Psoriasis affects everyone equally. It can affect anyone, regardless of age, financial background, or skin tone – even infants and young children.

Children may inherit psoriasis from their parents because genetics is one of the main causes of the condition. A 10% risk exists that the child will also develop psoriasis if one parent does. 50% of children are likely to have it if both parents do. In America, 200,000 children aged ten and younger receive a psoriasis diagnosis yearly.

8. Psoriasis can be prevented.

This is a perplexing myth. Some psoriasis risk factors can be avoided. Your risk can be decreased by controlling your weight, stress levels, alcohol intake, and smoking. However, the disease also has a genetic component, making prevention difficult.

One thought on “Misconceptions About Psoriasis”