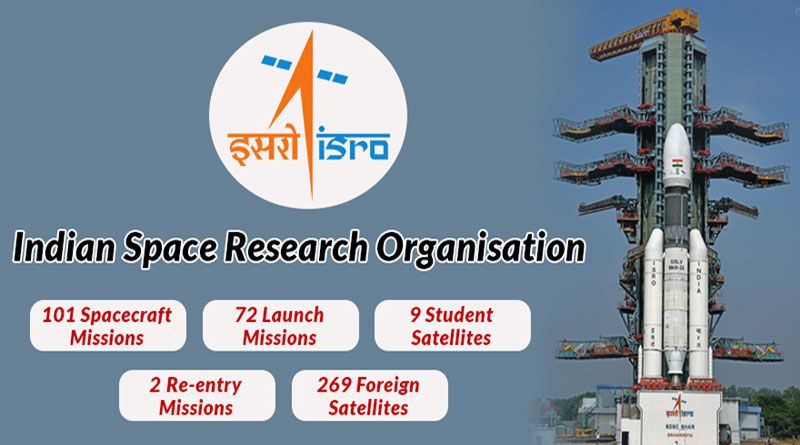 The Indian Space Research Organization (ISRO) is an Indian space exploration agency. It was set up in the year 1969. It is headquartered in Bengaluru. ISRO replaced INCOSPAR (Indian National Committee for Space Research) which was established in the year 1962 by our first Prime Minister Pandit Jawaharlal Nehru and scientist Vikram Sarabhai, who are considered the founding fathers of our esteemed Indian space program. ISRO’s chief executive is the chairman of ISRO and the Indian government’s Space Commission and is also the secretary of the Department of Space.

Satellites are designed, assembled, and are tested at the U R Rao Satellite Centre established in Bangalore. The Launch vehicles are developed at the Vikram Sarabhai Space Centre which is in Thiruvananthapuram. Further, the launches take place at the Satish Dhawan Space Centre situated on the Sriharikota Island, near Chennai. ISRO’s commercial arm is the Antrix Corporation having headquarters in Bangalore.

You may like:  How to Send a Thank You Note After an Interview [5 Tips]

ISRO is one of the elite space agencies in the world. ISRO built the first Indian satellite, Aryabhata, and launched it on April 19, 1975. Another satellite, Rohini, was launched in the year 1980 which became the first satellite to be placed in the orbit by SLV-3 successfully. Further, two rockets were developed and launched by ISRO i.e. the PSLV (Polar Satellite Launch Vehicle) which was used to place satellites into polar orbits and the GSLV (Geosynchronous Satellite Launch Vehicle) to place satellites into geostationary orbits.
Recent remarkable space activity of ISRO are Chandrayaan-1 lunar orbiter, Mars Orbiter Mission i.e. the Mangalyaan-1and ASTROSAT space observatory. The successful launch of the Mars Orbiter Mission made India the fourth country in the world to successfully reach the Martian orbit. Another recent development and launch of ISRO was the Chandrayaan-2 which was launched on July 22, 2019. Unfortunately, the mission failed but still, it can be considered as a big achievement of ISRO.

The admission in The Indian Space Research Organization (ISRO) is undertaken by way of an entrance exam in its Bachelor of Technology courses. Interested candidates can check the details of admission and eligibility for admission which is given below.

You may like:  What Makes a Good Team Leader?

The candidates are required to pass Intermediate/ Class 12th from the PCM Group along with the required minimum percentage as stated by ISRO. The candidates must have passed B.Tech degree with a minimum of  65%. Final year students can also apply provided they show the same at the time of final selection.

For more detailed and updated information regarding the Indian Space Research Organization, you can go on the official website of ISRO, Government of India.