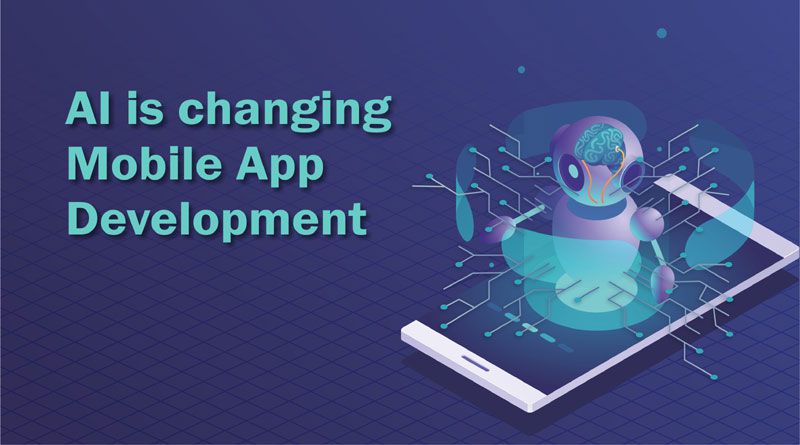 Before diving into AI and Mobile App Development, let’s take a look at this timeline.

The concept of Artificial Intelligence or Robotics or Machines that can think like human and make decisions like humans goes back to Antiquity and Greek Myths. Who doesn’t know about Mary Shelley’s Frankenstein as well as Karel Čapek’s play R.U.R. (Rossum’s Universal Robots) or C3PO and R2D2 in Star Wars….

In 1950, Alan Mathison Turing, an Englishmathematician, computer scientist, logician, and philosopher created the Turing Test to ask, “Can machines think?” in his paper “Computer Machinery and Intelligence.” Turing is widely considered to be the father of theoretical computer science and artificial intelligence.

In 1980, Edward Feigenbaum known as father of expert systems developed a computer that makes decisions as a human can. Researches and inventions continued in the following years which included Artificial Neural Network, Robotics and what not. 1997 IBM’s Deep Blue defeated the World Chess champion Grandmaster Garry Kasparov. Fast-forward to the 20th century and we all know how to use “Hi Siri”, “Hello Google”, “Hey Alexa”, “Cortana” and numerous other AI powered virtual assistants, voice assistants and chatbots.

Isn’t it interesting that the AI has just become a mainstream buzzword, in the past couple of years to say so but its history goes long back?

The scope of Artificial Intelligence is so wide that you can imagine AI do almost everything that a human does, sans emotions, love and such humanly feelings which are irreplaceable. Today Artificial Intelligence has a huge impact on our businesses, society and lives. With more and more tech and non-tech companies taking deep interest in integrating AI technologies, AI has become more demanding than ever.

We know that Mobile Apps have become an integral part of our lives. Mobile apps are one of the most important tools for companies and business to grow their consumer base and user base. Mobile apps are the strongest medium for User Engagement, Ecommerce, Visibility, Customer Service, Communication, Promotion and Accessibility for Businesses. And therefore, Artificial Intelligence (AI) is changing Mobile App Development for Those who are transforming their app ideas into reality that integrating AI and ML in their app development.

Let me list out areas where AI is making difference in Mobile App Development:

Let’s see how each of these AI technologies is changing Mobile App development.

You may like:  How to create PWA for online dating?

Many researches show that the use of virtual assistants with speech recognition capabilities is estimated to be near 70 million users in just the United States by 2019 and to be further increasing.

The mobile apps using speech recognition gives a great accuracy in identifying the person speaking and sending commands. Not to forget that Alexa Echo by Amazon, Google Home, Facebook’s AI based speech recognition in its Mobile App and other smart devices are also becoming more popular day by day.

AI based chatbots have become a Hit among the Mobile App Developers and companies who want to provide extraordinary user experience and customer support to their users. With AI based chatbots in Mobile Apps upto 70% to 80% of conversation can be done human-less and the companies can use the same Human Resources into more ‘exciting’ tasks. Many of us might already be experiencing AI based chatbots of our Financial, Banking and eCommerce mobile apps.

NLP or Natural Language Processing is the AI branch which is the basis of AI based chatbots and virtual assistants in Mobile Apps and other platforms. Chatbots are highly dependent on NLP engine that parses complex human language into a language that computers or machines can understand and learn from. Better the NLP engine, the better the accuracy of Human language processing by machines.

You must have experienced that on your Mobile App especially, apps like Facebook, WhatsApp, Google Search and others, when you start typing, you get recommendations. These Mobile Apps tend to predict text for you based on the past inputs that you had made. This exactly is AI based predictive text technology for Mobile Apps. These keyboards on your Mobile App are powered by Artificial Intelligence and Machine Learning algorithms that does predictive analysis based on the past data and recommends you the next text that you want to type.

OpenAI, a non-profit AI research organisation has recently introduced its model called GPT-2 which can write content like humans. This AI Predicity Analysis model predicts the next word or even a full-length article once you give it a sentence as a topic.

If you have ever used Google Maps ‘nearby’ feature, you know what I am talking about. Such Mobile app suggestions based on location are powered by an Artificial Intelligence engine that works under the hood. The Mobile App gets the location of the user as input and the AI engine integrated with the Mobile App searches for the nearby locations based on your input interest and suggests you the locations. Slowly with more and more use and data, the ML algorithm learns what you like and starts giving you suggestions based on your location from your Mobile App.

For Mobile apps with large user base (with large I mean millions of users), how difficult would it be to classify inputs by each users? Imagine if that needs to be done by human staff, how many people will be needed 24×7 to classify each input by user. Images, especially on Social Media Apps need to be classified to protect the platform from offensive, pornographic, objective and similar materials. This is not possible with human involvement but thanks to AI and ML – it has become so easy, that in a matter of seconds an image can be classified and stopped getting published.

The same AI based technology are now being explored to make Camera and Image processing achieve better results with the help of Predictive Analysis and Machine Learning. While I am writing this, there is already a news that Adobe is soon going to launch an AI powered Camera app called Adobe Camera that will change the way Mobile Apps and Cameras on Mobile Devices take pictures.

ML and AI based Targeted Marketing on Mobile Apps:

You should have noticed that while using Apps which allows promotional content and advertisements, you are offered with only those Advertisements that you have an interest in. How can a Mobile App know that what is your interest and offer similar products and services? Well, because these Mobile Apps uses AI and ML during their development. The AI has changed the way marketing is done today. Today, companies with the help of Artificial Intelligence and Data Science know exactly what a user is interested in and offers content on Mobile Apps. Haven’t you seen Netflix recommending you the movies of genres that you are interested in?

Similarly, on your favorite eCommerce Mobile App, you might be getting recommendations of products that interests you. This all is the magic of AI based Mobile App development. The AI lying under the hood of Mobile App gives you a personalized experience based on your past inputs. The Machine Learning algorithm integrated with the mobile app learns from your past choices and recommends and predicts your next move!

The biggest take away is the Artificial Intelligence is changing the Mobile App Development. The companies, businesses and mobile app developers are leveraging AI and Machine Learning platform with the help of Data Science. And the future Mobile App Development will be done keeping the AI technologies in mind so that the Mobile App user can have much better and personalized experience. The future Mobile Apps are surely going to be much more powerful with the help of Artificial Intelligence.

4 thoughts on “How Artificial Intelligence is Changing Mobile App Development?”