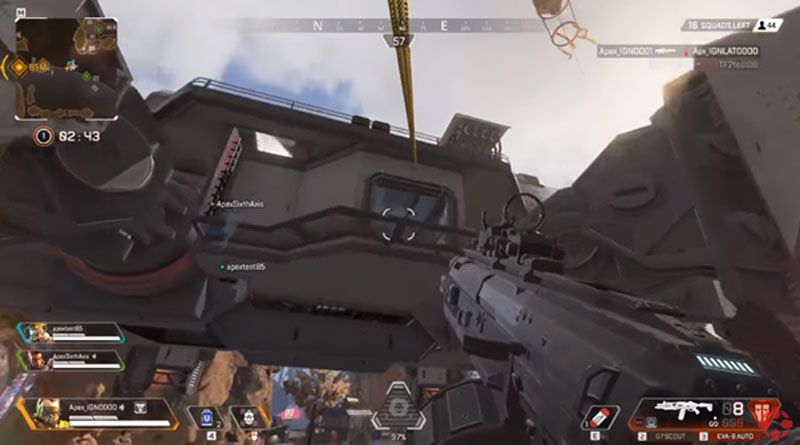 Apex Legends is a competitive online game that tests the players’ team building and shooting abilities. With a range of characters to choose from, each with its individual power and personality, Apex Legends gives the player a feel of a real shooter. Winning the game is not just about one’s capabilities but also about how the player excels taking his squad together leading the entire team to victory. The game thus creates a gang of players that work together to achieve a similar goal.

Diving and gliding down

You start diving headfirst from the dropship along with your squad and while you may feel that you are falling fast you are surprised to see your rivals diving even faster. And you are scared because if your enemies reach land before you then they would be at an advantage to get hold of the best loot. Let us help you nudge the fall speed to your advantage. Aim to plummet down roughly at 145mph speed so that you glide at a shallow angle. If you slow down to around 130mph then increase the speed again. Repeat this process over and over. The method works particularly well if you wish to reach the drop point at a distance as the method lets you cover a lot of the ground immediately.

Use the little legends to your benefit

Each legend has a simple contrast but it is also something that is usually overlooked. However, this plays a major role in deciding whether you will be gunned down or will escape the fight with just a sliver of health.

You may like:  3 Tips for Starting To Sell Handmade Jewelry Online

Aim to get the top tier weapons

There are many weapons all scattered about and you have very limited time to practice them. This makes it difficult to figure out which of them packs the maximum punch. The top-tier weapons are the Longbow, Mastiff, and Kraber. The Wingman is a good choice too. It all depends on the kinds of accessories that you have attached to each of the weapons and at what distance are you located to your enemy. These should be enough to figure out the weapons that you need to fight for.

Stay away from the UI clutter

The pesky clutter in the UI should be eliminated. This is an indirect method but it does pay to increase visibility. Using this technique lets you stay sharp and effective in the battle and wipes off the dirt. The pesky text will be eliminated giving you enough room to figure out your moves. The only flip side of this is that you will be bombarded with less information. To keep your screen clean just go to the gameplay settings and look for the interact prompt style and change it to combat.

Aim for the head and then the chest

This is an unwritten rule in all the FPS games and it pays to mention it here again. Always aim for the head first and then for the chest. The Apex Legends game takes this bit a little further by incorporating damage levels to varied parts of the body. The headshots offer the greatest damage and the chest shots are the next step down. Then comes the waist, legs, and feet. It thus pays to hit in this order.

You may like:  Buy The Best Quality Neon Bar Signs Online

Get a positional advantage

All the Royal Battle shooter games talk about the benefits of positional advantage. It is important to decide at which angle to target the enemy which plays a key role in a win or a lost encounter. So what exactly is a positional advantage? Every combat asks for a different method as per the situation. If you are fighting the enemy in a flat field then the players would either flank the enemy squad or get hold of the best cover. Also if the fight takes place in a canyon side then the side that gets hold of the high ground will defeat the squad that is superior technically.

Being elusive is the key

The first in this list is strafing which is a technique popular in most of the FPS titles and increases your survivability. In this technique, you move from one side to the other in a firefight. The method does increase the success of the player in a combat encounter.

The next is the technique of drop shot which offers a powerful mode of sliding. The players fall to the ground fast and unleash a bullet stream.

Some characters have an advantageous option for a movement like a Pathfinder that offers an engagement tool and a powerful evasive weapon.

Apex Legends is a difficult game and takes lots of hard work to reach the upper players’ echelon. The player needs to be through with the mechanics and the game and have a strong sense of team building and teamwork. Even the best players at times find it difficult to crack the game because of their shortcoming to operate as a team. It is the perfect blend of team play, game philosophy, and the FPS skills that make one excel in Apex Legends.