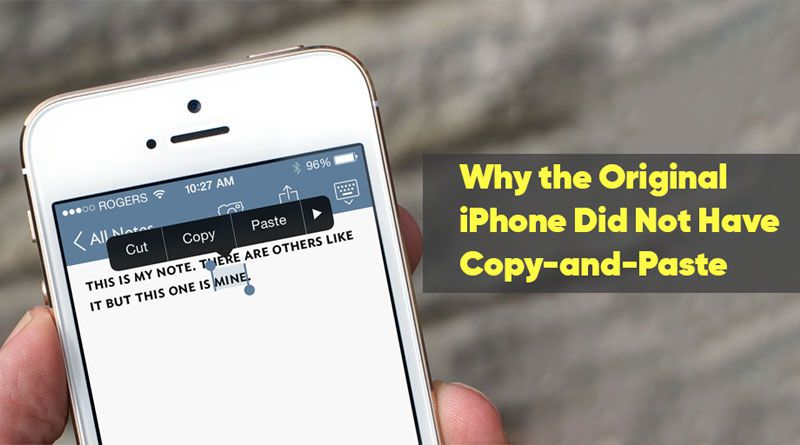 Apple released the original iPhone 15 years ago, and a lot has happened. We’re currently speculating about the next iPhone sporting an 8K video and a new display. Still, it’s hard to think that the iPhone used to lack copy and paste capabilities. Former Apple software engineer and designer Ken Kocienda have now disclosed why the initial iPhone lacked such functions.

Why Did the First iPhone Lack Copy-and-Paste Capabilities?

According to Kocienda’s brief and amusing explanation, Apple developers did not have time to incorporate copy and paste on the original iPhone.

He said that the team was already working hard on the iPhone’s virtual keyboard and autocorrect technology. Kocienda and his team ultimately decided to work on copy and paste options and migrate data capabilities after the iPhone was released. Still, it took some time before the functionality was available to consumers.

The engineer adds that he devised the “magnifying text loupe” concept to let users understand where they were directing the text cursor, which was critical to having copy and paste. However, even with the original virtual magnifying glass, the pointer moved between characters when the user pulled their finger off the screen owing to natural flickering.

You may like:  Everything you need to know about Change Data Capture

Kocienda had to create a “touch history log” for text editing. As a result, after removing the user’s finger from the screen, the system automatically recognised the location of the user’s finger milliseconds after the last touch, ensuring that the cursor stayed exactly where the user wanted it.

Another intriguing aspect of the iPhone’s text input system is that, according to the former Apple engineer, all stylised text was initially based on WebKit. This meant that whenever an app used a custom font, it essentially rendered the text on a mini web page. When the text fields were not in edit mode, they displayed a static picture of their contents — most likely to save CPU, RAM, and battery power.

Copy and paste functions were added to iPhone OS 3.0 in 2009 and were pre-installed by default on the iPhone 3GS. Apple even produced a TV commercial showcasing the new function at the time.

Apple’s iPhone has become a status symbol around the phone; it exudes luxury. The Silicon Valley tech giant is constantly updating and working on the next thing to beat its competitors. The latest iPhone is ahead of the first model. We can’t wait to see what the company comes up with next.

You may like:  Role of Peer-to-peer Technology In Bitcoins- Points To Note