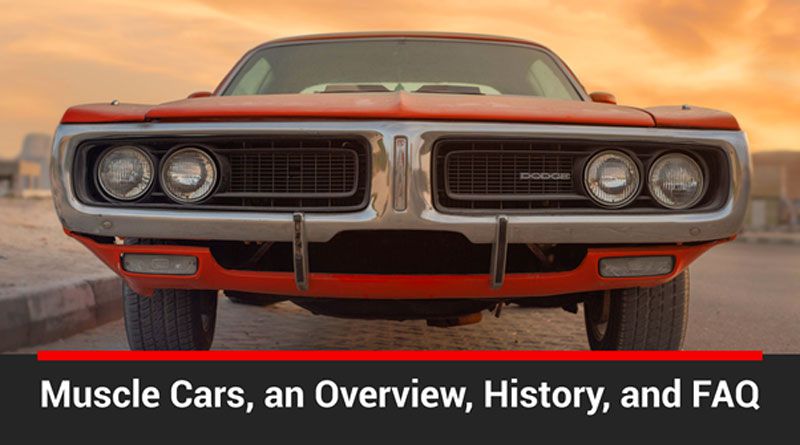 Have you ever wondered what those high-performance, fast, and brightly colored cars that show up in American movies?

Are you one of those gearheads who dream of riding these sleek and attractive automobiles?

Of course, we’re talking here about muscle cars that were an innovative creation in their time and made all car enthusiasts obsessed with them.

To this day, car geeks are in love with vintage, classic, rare cars, especially if they are high performance with a strong engine and excellent speed, and muscle cars took a special place in the heart of everyone. I mean, it’s not odd to love a car that has amazing features, rich history and is stylish.

Keep reading to know more about these charming vehicles.

What are muscle cars?

Muscle cars are an innovative American creation that pioneered through challenges. They have a cool roaring noise, 2 doors, and rear-wheel drive and were as famous as Coca-Cola at that time for their affordable price and powerful engine.

Muscle cars tend to be small cars with good handling and great performance, especially on twisty roads, so this combination of a light body car with a roaring engine led to the muscle car definition.

In the 1960s, Pontiac coined this terminology describing their 1964 GTO, then after this origination, it continued to be a descriptor for many souped-up vehicles.

What qualifies a car to be a muscle car?

The exact definition of what qualifies a car as a muscle car is debatable, but in general, there is a criterion to follow:

The time of hot rods in the 50s’and early 60s was very important for car enthusiasts because that was when they put big engines in basic cars as the CEO of Dodge, Tim Kuniskis says, and that was the very grassroots level of muscle cars that ruled the streets of America from 1964 to 1970.

The history of muscle cars goes back to when moonshiners and bootleggers wanted fast cars, cargo capacity, and handling in the 1920s, and that’s because they wanted to be able to run from police cars, so they started to modify their own to match their needs.

However, in the 1940s, these cars became more efficient and moonshiners used them for racing which inspired Oldsmobile Rocket 88.

As a result, muscle cars were introduced in 1949 as a response to this sudden demand for faster cars. So at that time, Oldsmobile replaced its Rocket 88 which had a high-compression overhead valve V8 in the Oldsmobile’s lightweight body which was the same platform of their 76 that was designed for a six-cylinder engine.

Muscle cars were intended for streets and drag races and referred to as Supercars in America and anyone who owned them knew that their car value was really high. In 1950, the Rocket 88 dominated the NASCAR circuit which made everyone lose his/her mind because of its speed.

You may like:  4 Tips To Finding Good Crypto Mining Hardware

What is the most powerful muscle car?

Perhaps the most powerful muscle car is the 2018 Dodge Challenger SRT Demon with its impressive 840 hp engine.

What is the fastest muscle car?

Dodge Challenger SRT Demon, relieved in 2017 and introduced as a 2018 model is the fastest muscle car ever built.

What is the rarest muscle car?

The 1969 Chevy Corvette ZL-1 and the 1967 Dodge Corvette R/T 2426 Hemi were only two cars of each model ever which makes them the rarest muscle cars ever built.

What is the most expensive muscle car?

The most expensive car is the 1962 Shelby Cobra CSX2000, which has a price tag of $13.75 million after it was auctioned off by RM Sotheby’s in Monterey.

What is the cheapest muscle car?

Finally, Dodge revealed that they will be launching “the world’s first full battery electric muscle car” in 2024 as the Chief Executive Officer Tim Kuniskis said during the American brand’s Electric Vehicle Summit, which is great news for many car owners. You might want to sell your car and buy an electric muscle one!