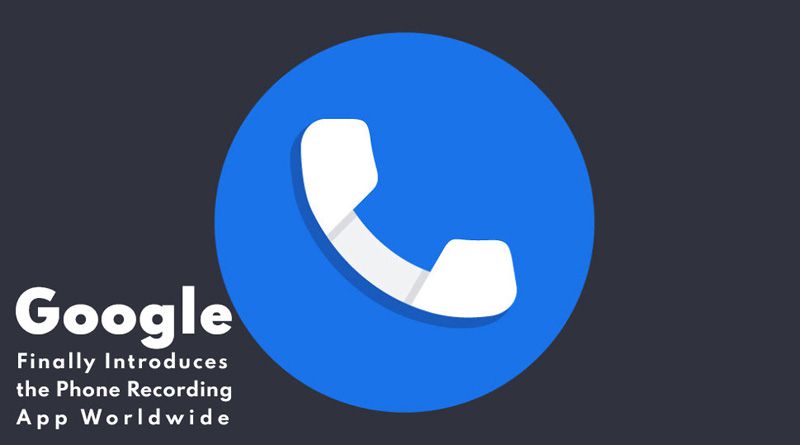 Google is the world’s most visited website. Google owns two more additional websites, YouTube, and blogger, they are also on the list of most popular websites. Google ranks second and Interbrand fourth on its list of most valuable brands. On concerns like privacy, tax evasion, censorship, and search neutrality, it has been strongly chastised. Google has several features that have not only made human life facile, as everything is just one click away.

Furthermore, utility apps such as SMS Share and call recording have been very popular nowadays.

Pixel devices were the first to receive recording features

Although the call recording feature of google arrived late it is now accessible on Pixel devices worldwide. Call recording was available on other devices incessantly but due to legal constraints in some regions, you may not be allowed to use it on yours. Previous Google Phone upgrades have already rolled out the feature to other devices, but if you own a Pixel and live in a region where call recording is permitted, you should soon be able to use the in-app option.

You may like:  Top 7 Benefits of Outsourcing IT Through Managed Services

Google revealed about a year ago that call recording would be allowed on Android if you had a suitable device and resided in a country where it was permitted. The feature first appeared on Nokia phones, then on Xiaomi phones, and it eventually obtained the ability to record calls from unknown numbers. It’s now reaching the Pixels as well.

This is the first time the call recording feature has appeared on Pixels without the need for any mods or hacks, as far as we know. Given how geo-restricted the functionality is, as well as its aleatory server-side component, we wouldn’t be shocked if it’s been available for some time. It also appears to be appearing on OnePlus phones, though we’re not sure if this is a new occurrence.

In India, Twitter user Jay Prakash demonstrated that the feature is available on his Pixel 4a device. When activated, an additional “Record” button appears on the usual calling panel as soon as the call is connected. Simply launch the Google Phone app > Settings > Call recording to enable or check if the feature is enabled on your device.

The disadvantage is that even if you have the most recent Google Phone beta or stable release installed, it may not show if recording phone calls without prior notice is unlawful in your country/region. Having checked if the function is live on several of the Pixel devices, it can be confirmed that it is not accessible in the UK.

You may like:  5 Strategies for making a profit out of app development

If you have the option to use the call recording feature, you can have the app delete any saved audio after 7, 14, or 30 days in the Google Phone settings. Alternatively, you can set files to be kept indefinitely for manual deletion as needed.

More information on the Google Phone:

You can join the beta if you have a Pixel and live in a country where call recording is legal, or make sure you’re on version 68.0.388241074. That should improve your chances of seeing it on your phone.