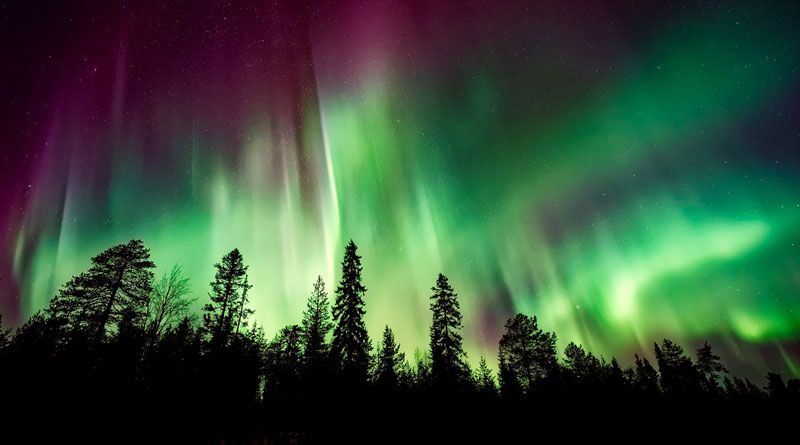 The Northern Lights – The Most Spectacular Natural Event in the World has always allured back-packers, astrophysicist, and common folks as well. This wonderful and colorful extravaganza make the night skies glow. You can witness these rare phenomena in several countries located in the Northern Hemisphere.Aptly, it is recognized as one of the 7 Natural Wonders of the World.

In the polar regions of both the hemispheres, you can witness this natural display of colorful lights. They are known as polar lights or Aurora Polaris. in the northern hemisphere, it is termed as Aurora Borealis whereas the same is called as Aurora Australis in the southern polar region.

Many of the global travelers must have a lifetime wish to have a view of the event. But for a clear view, you need to reach specific destinations at a particular time of the year.

Where Does It Occur

The spectacular natural phenomena take place in the polar regions of the globe. But it is more visible in the northern hemisphere (66 to 69 degrees north) from different locations. To make sure, your visit goes futile; you’ve to choose a suitable spot and reach there in time.

Some of the most preferred regions (named as “Aurora Zone”) to have a spectacular view of Aurora Polaris you have to visit Alaska, Canada, northern Scandinavia, northern Russia, and Greenland.

Which Time is Better

Aurora Polaris is visible right all through the year. But, the frequency and scale of occurrence vary over the place. If you travel to Alaska and Greenland are regions where the chances of view are more in most nights.

You may like:  Key Reasons To Invest In Dubai's Real Estate

Wintertime is regarded as the best time to view them in the North. Although it occurs during the daytime you can’t see them properly due to the sunshine. The clear night sky is required for a “king-size” view.

Reasons behind the Northern Lights

When solar particles undergo a collision with atmospheric gases then the Northern Lights happens. Due to the collision ‘the collision energy’ is created which get emitted (as a light particle called ‘photon’) in the sky. More solar activity leads to a bigger and brighter band of lights.

Where To See the Celestial Scene

To see the sea of dazzling lights in the vast canvas of the sky to have to go to specific places known as hotspots for Aurora Borealis. The color pattern, size, and clarity vary from place to place. To get the most out of your visit you should plan to visit any one of the following Aurora-Destinations.

Alaska is undoubtedly one of the best Aurora-Destination. The cold climatic condition, clear skies, and gloomy nights enhance your viewing experience. Besides, you can enjoy the mountain ranges, forests, wildlife in the backdrop.

Most parts of Northern Canada is ideal for spotting these light phenomena. the Northernmost territories, British Columbia, Yukon,  and Saskatchewan are the hottest locations in the region. The best time to visit these areas is from late August to mid-April when it won’t be too cold to enjoy your time there.

You may like:  A three-day trip to Orissa from Kolkata

Tromso, the northern township in Norway is one of the most sought-after Aurora destinations. It is located only 217 miles north of the Arctic Circle. Still, the coastline experiences a moderate temperature…thanks to the warm Gulf Stream. If you are visiting this place you have some bonus – the Lyngen Alps, beautiful scenery, magnificent…and a lot more!

Kakslauttanen is a well-developed place to spot aurora lights. Glass igloos are available to get relaxed inside and watch the ‘witchcraft’ of nature. Once there, you may also like to visit the Urho National Park situated nearby. Otherwise, experience some adrenal rush in a reindeer safari or take your kids to Korvatunturi, the Santa’s home.

Seltjarnarnes, located in Reykjavik,is part of North-Western Iceland. The place offers perfect locations to observe aurora lights. Also, you have something extra in form spectacular views of blue ice, volcanoes, and geysers.

The spectacular Northern Lights are certainly the best among the 7 Natural Wonders of the World. It is a heavenly phenomenon with the dance of intermingled lights of different bands. Witnessing this celestial celebration is a once in a lifetime affair. Now, it’s time for you to act…yes to plan…for a suitable Aurora-Destination well ahead of the most appropriate time.

Yogi and Suchna believe in taking the road less travelled and stumbling upon some hidden gems along the way! For over a decade, they’ve mapped their way across various continents, sniffed out unusual routes, discovered new flavours and stayed at quirky hostels. TheVillaEscape is their expression of soul travel. To check Northern Lights Iceland you can catch up with them at TheVillaEscape.