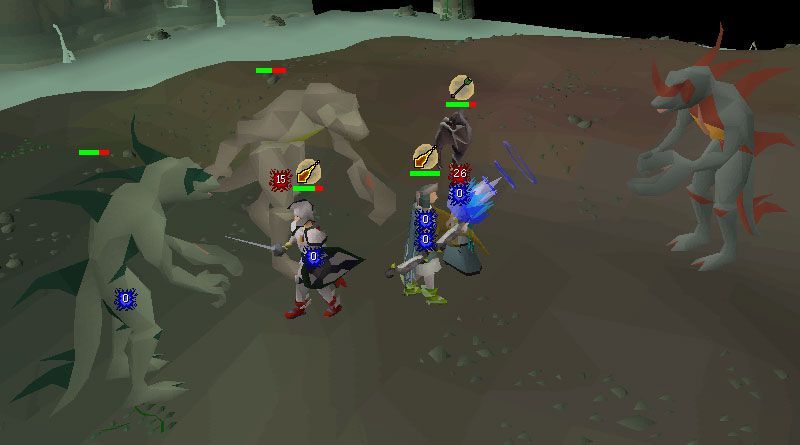 Trio bosses that are found on the sixth floor in the Waterbirth Island Dungeon, and are known for their drops, such as; the dragon axe, berserker ring, archers ring, warrior ring and seers’ ring. Not only that, but the bones that they drop are also valuable, which makes them quite rewarding,But this may consume a lot of osrs gold.

All three of the Dagannoth kings use different attack styles and they need to be killed using different setups.

Prime uses magic attacks and you will need to activate ‘Protect from Magic’ while fighting against him. If you fail to use this prayer, the boss can damage up to 50 and easily kill you in just two hits. This boss is weak to ranged attacks, so that would be the recommended set up to fight against him.

Rex uses melee attacks and he is quite easy to defeat. You can trap him by luring him to the edges of the islet where he can get stuck. This boss is weak to magic attacks, so that setup is recommended while fighting against him.

Supremes aggro is somewhere between prime and rex and is also easy to defeat. His hits are weaker than primes and harder than rex and can hit multiple targets if they’re facing towards him. This boss is weak to melee attacks.

Spinolyps are small Dagannoth like creatures found in the sublevel of the Waterbirth Island. Although they are very weak and their hits are not that accurate, they use ranged attacks to poison you, and magic attacks that can drink one prayer point if it successfully hits. It is recommended that you bring antidote++ potions along with you.

This setup is mostly used to defeat the easiest kings out of the three because he can be safe spotted, as well as provides a chance of receiving the item; Berserker Ring. Trips to dungeon can last longer by the help of Guthan’s armour set, Saradomin god sword and blood spells because of the random effect of healing. To utilize the best damage for the combat spell ‘Flames of Zamorak’, a Staff of the dead combined with the charge spell and Zamorak cape is the best choice. You can increase the damage by 50% by using the spell ‘Claws of Guthix’ with the help of Guthix cape and a Void knight mace (Auto-cast).

Rex killers will want to make it around to the east side without having the other kings notice them. They also need the help of a friend, who can carry spare food and potions to trade over at a safe zone. Aside from that, protect from magic spell should be turned on while climbing down the ladder, and if by any chance you draw any attention to the other kings, it is recommended that you climb back up. Once they’re away, head east as quick as you can be sticking to the coastline and luring the rex towards you.

You may like:  Trip to Donegal: Have a Great Experience for me

This setup means using all three attack styles; Magic, Ranged and Melee equipped by a single player to kill all the three Dagannoth Kings. This is only recommended if the player can afford good enough equipment to be able to kill all the kings fast and easily. However, if you don’t have so much experience and more runescape gold, it is better if you take a friend with you who can help you deal with rex while you focus on prime and supreme.

As mentioned above, enter the area using protect with magic, and try to get supreme as close to the ladder as you can before finishing him off with the prayer Piety. If prime is at distance and is not focused on you, while supreme is close to the ladder, it is better that you turn on protect from missiles and focus solely on finishing off supreme first. You can lure him in, by continuously climbing up and down the ladder until he finally notices and makes his way towards you. After that, safe spot rex and kill him, and then head north-east with protection from magic on and kill off the last of the kings; prime. The best safe spot location to kill him is shown in the picture to your left, which is denoted by rocks on the ground in a triangle formation

You may like:  Tips to Improve Internet Safety and Security

The most minimum viable setup for players with lower levels and wish to kill rex with gear within their budget. Ironmen can also use the following setup to get Berserker Ring early in the game. These items are the ones that can be accessed without high skill requirements or are normally obtained from boss drops. Your inventory should consist of items like Rune throw axe, Pet rock, 2-3 Prayer Potions, 2-3 Super Anti-poisons, and you can also use High alchemy runes and Ancient mace to restore your prayer points. Apart from that, the food requirement should be the highest healing food that you have access to and teleporting runes in case of emergencies.