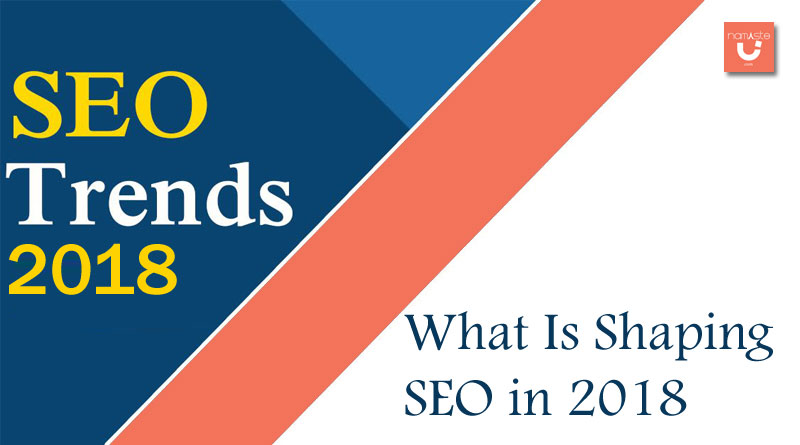 It’s no secret that SEO is a very dynamic field, and most SEO specialists have become used to constant changes by now. However, 2018 is a bit different, since there are so many of them, and so many new algorithms and tools which you will have master and implement if you are interested in keeping up. And while you certainly can’t keep track of all the changes Google makes, since it looks into around 200 major factors when ranking your website, some technologies are shaping up to become a necessity. We are talking about voice search, AI, RankBrain, features snippets, and machine learning, among others.

All of those will change the way we do SEO in a big way, which is why we have put together a list of the most important trends which are set to change the SEO landscape in 2018. Keep on reading.

While Google hasn’t come out and said that it counts this among the 200 major ranking factors, you still need to put some effort into it. Why? Well, while it may not a ranking factor, it will improve your chances of appearing higher inside the search engine results. For instance, structured data is more likely to appear inside the rich snippets which are shown along with your regular search results. People are more likely to click on rich snippets, which in turn boosts your CTR (click-through rate) by as much 30%. Ultimately, this will affect your ranking in a positive way.

The most common, and arguably the best way to come up with structured data would be to use Schema markup. Google’s very own John Mueller, who is their Webmaster Trends Analyst, has confirmed that Google considers schema as a ranking signal.

According to Google, RankBrain is the third most important ranking factor. And it’s probably set to become even more important, because it is an algorithm that is using AI, which allows it to think like a human would. For example, it considers a wide range of data, such as social media activity and click patterns in order to place the search inside a proper context and figure out the intent behind the search. In order words, it is able to understand the actual content.

Also, once it comes across a keyword or phrase which it doesn’t recognize, it is capable of discovering phrases whose meaning is very close, which makes the results far more accurate, whether you are looking for assignment help, or information about your potential client. This means that long tail keywords are about to become obsolete. Instead, you should target medium tail keywords, because once RankBrain ranks your website for that particular keyword, it will also rank for countless others which have a similar meaning.

If you think voice search isn’t all that popular, think again, because over 55% of teens, and as much as 40% of adults use voice search every day. Blame it on the popularity of smartphones, as well as the emergence of digital assistants like Siri, Alexa, or Google Home. The main difference between text search and voice search is that in the case of the latter, users rely on natural speech and full sentences in order to get the results that they need, which makes for an entirely different experience that feels a lot more personal. It also ties in with structured data which we have mentioned earlier, because only the content of the features snippet are read as the result of voice search.

Of course, YouTube has been around for quite some time now, but its popularity has only been growing. In fact, it is the largest search engine not named Google (even though Google owns it), and seeing as people just can’t enough of video, some tend to avoid Google altogether and head straight to YouTube. Yes, creating videos for YouTube is time-consuming, and optimizing them for SEO is complex, but on the bright side, most of your competitors hate producing it, which means that that particular field is not oversaturated. Videos can help you drive a significant stream of traffic to your website, especially if you are posting regularly.

You may like:  Most Reliable Academic Assignment Writing Company

Backlinks from authority websites are a huge ranking factor, but it seems like their impact will not be as massive in the future. The main reason for that are linkless mentions. You see, backlinks can be bought, and they can be manipulated, and while that may become the case with linkless links later on, currently they are almost as important as regular backlinks. Search engines have gotten smarter over the years, and they are able to connect mentions to brands, and in turn, figure out whether or not the website is a place of authority. Bing has confirmed that they have started relying on linkless mentions, and while Google hasn’t done the same, they have filed a patent which has pretty much done it instead of them.

Yes, Google’s mobile-first indexing is finally here. We’ve been hearing about it for years, so it hardly comes as a surprise, especially considering the fact that over 50 percent of searches are done using mobile devices. Also, if there is one reason why you can’t ignore it any longer, it is the fact that Google is using it as a ranking factor, which means it will give your website a lower ranking in case it was not designed with responsiveness in mind. In case your website is not mobile-friendly, you will have to opt for a new design if you want your ranking to remain the same or better.

It seems sort of repetitive to say that SEO is about the undergo a change, because something like that happens almost every year, but in 2018, those words have never been truer. With so many new trends set to replace the old ones, you will have your work cut out for you, but at least now you know what you need to do.