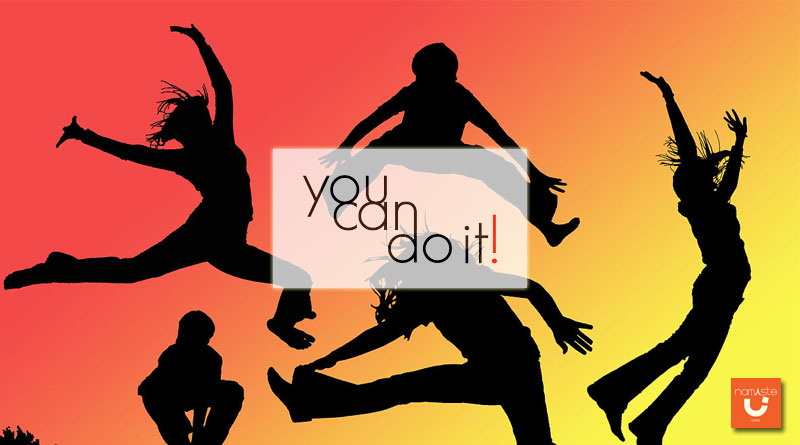 I am sure you have heard the words “You Cannot” a million and one times. “You cannot go out for the basketball team because you are too short.” You cannot do this, you cannot do that. When was the last time you gave yourself permission to go after what you want? Yesterday, today, last year. Well, allow me to give you that permission that you, yes you, are looking for. Let me give you the permission, the go-ahead to achieve your dreams. Now how does it feel to get that permission? Feels good, doesn’t it? Just getting the go-ahead to go after what you want is a great and wonderful feeling.

I have heard the words “YOU CANNOT” far too often, to the point of I started to believe them. I have heard them from friends, immediate family and even co-workers with whom I work with. I have heard them so often, that when I got an idea of starting my own business when I was in my 20s, I started to believe that I couldn’t do it. I had the map of what I wanted, had all the plans laid out, but I have heard the words “You cannot” so often and so many times, that when it came down to the wire, I gave up on the business idea that I had. Just like me, I am sure you have heard the “You Cannot” story a few dozen times. “You are too fat, you cannot try out for the cheerleading squad.” “You cannot do this, you cannot do that.” I am sure you have given up an idea or two or ten for a company you had planned to start, but because you have heard “You Cannot”, you have shelved the idea, given up the dream and just go with what is safe. I am sure that you have given thoughts to dreams that you had that you never fulfilled because you yourself have talked yourself out of it because of the “You Cannot” you have heard over the years.

You can do great and marvelous things and you can be great at whatever you choose to do, and set your mind to achieve. To achieve this, you have to change the You Cannot into You Can. This is not going to happen overnight and there is no magic pill or wand that you can take or wave and presto, you have instant-change. You just have to get up, stand up and tell your mind, that you are going after what you want. This is what I had to tell myself. I had to get up, shake the “You Cannot” cloak off and put on the cape of “You can” and go after my dream. What I believed that I cannot do or could not do, I could do and did. You can do that too. There are those two little words, YOU CAN. I started to believe in my You Can faith and though it was a little shaky at first, it grew into this self-belief. Like a snake shedding its old skin, I had to shed mine. The skin of negativity, the skin of complacency, the skin of making everyone happy at my expense. When I was done, I felt raw, vulnerable and scared, but I was eager, wide awake and excited to make my mark. You are going to shed the skin you are in now, grow a new one, a tougher one. Words that were used against you, to discourage you will not matter one iota now.

You may like:  Six Cheap Ways to Professionalise Your Blog Posts

There will be days when you will not feel that “You Can” and will revert back to You Cannot. I have had days like this and I am not going to lie and say that it is easy to change your tune. Imagine you are tuning into your favourite music station, but there is too much static, you adjust your radio until you hear the crisp, clear music of your favourite band. That is what you will have to do you with your mind. You have to adjust the static of You Cannot until you hear the sounds of You Can clearly. Michael Jordan of the Chicago Bulls, Tom Brady of the New England Patriots, Derek Jeter of the New York Yankees among other great athletes, have all told themselves that yes they can do it. I am sure that you can tell yourself that you will be successful and make it. Remember that shot Derek Fisher of the Los Angeles Lakers made against the San Antonio Spurs on May 13, 2004, with only 0.4 seconds on the clock? If he had told himself thathe couldn’t do it, and took the shot and missed then the Spurs would have won the game. Instead, he told himself that he can make that shot, and he did. Not only did the Lakers won the game but the push for a game five in the NBA Finals.

You may like:  Top 5 PayPal Alternatives To Transfer Money

Changing the tune of “You Cannot” to “You Can” will not happen overnight as I had said before.  There is no magic pill that you can take, or ask Cosmo and Wanda of Fairly Oddparents for a wish. It is going to take hard work, reinvention, drive, discipline and a good healthy dose of not listening, ignoring other persons and their negativity to follow your dreams. President Barack H. Obama did not let the “You Cannot” train derail his campaign, his dream of becoming a President. I am sure that persons have told him that as a black man living in the United States of America that he would not make it to the White House. I know the voices had meant well, but he did not listen to them. Instead, He rose to the bar and let the “You Can” flag be flown from the White House when he won. So start that company you have dreamed about, go for that job that you have always wanted, go back to school if you so desire. Let no one tell you that you cannot do it. Let “You Can” become your reality, take baby steps and change your mindset. It is going to be shaky at first, but as you gradually grow and grow into your new you, it becomes easier.

Peta-Gaye Campbell
Author and Poet Peta-Gaye Campbell is an islander at heart. She credits her love of reading which had gotten her inspired with the written word. A poet and a freelance creative writer, she loves to write short stories, articles and posts about everyday things that inspire her and sparks her imagination. She is the creator of The Lunch Bag Series which is currently found on LinkedIn and also the author of Finding the Champion Within. She enjoys going to the beach, reading a good book and traveling and learning about new cultures. Follow her on Twitter @therealpetakash, Instagram @petakash or email her at blogsbypeta@gmail.com