Skip to content
You May Like
How to Make Your Rental Feel Like Home?
Why visit Thailand in 2021: 10 good reasons to convince you!
Best Jobs After 12th 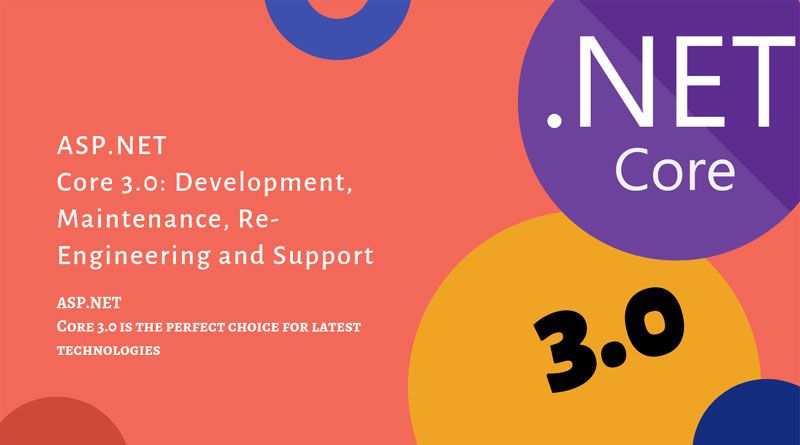 .NET Core is the modern incarnation of .NET Framework. It is not just open source, but it can be used for cross-platform or multi-platform development. It is the developed and most updated version of the .NET frameworks, and therefore, it contains tons of interesting and valuable features for the developers. ASP.NET Core development is a modern platform which has transformed the way the web applications are developed in the world today. The development market is seeing some mindboggling innovations since .NET Core has stepped into the industry. There have been several noteworthy improvements and enhancements in ASP.NET Development, the latest edition.

Development and Maintenance are much more advanced

First of all, the solution aids the porting each and every Windows desktop development to ASP.NET Core 3.0. At the same time, it is also regarded as one of the best solutions for the development of the products for the latest technologies. In recent times, we have seen that the interest of people in developing Artificial Intelligence and Machine Learning related products has increased massively. Thus, a host of new-age AI and machine learning apps and programs can be built using ASP.NET Core. Along with this, it seems to have a good scope in the world of Internet of Things (IoT) as well. ASP.NET Core is focusing on more and more modern implementation. Therefore, the developers are trying their best to use them for IoT systems, for cloud technology, etc.

What’s hot from the development perspective?

ASP.NET Core 3.0 is a big deal for the development industry. It is a noteworthy introduction for the .NET developers, and therefore, a lot of buzzes were already created, even before the launch of it. Irrespective of the type of web application that you are planning to build, ASP.NET is regarded as an option to be used. The main reason why the introduction of it is such a big deal is simply that there are tons of advantages that it is now offering. It has made the process of developing a lot more streamlined and efficient. At the same time, several noteworthy performance improvements make it a top choice of the industry. That’s not it; ASP.NET is also noted to be one of those solutions that boost the productivity of the staff. Additionally, the developers prefer it over other options because it helps them try out innovative techniques to build as well as enrich the.NET applications.

You may like:  The Internet of Things: How Will It Change My Life?

With the introduction of ASP.NET Core 3.0, it is believed that the full framework is phased out as .Net Core is regarded as the future. This has become possible because of the introduction of some of the coolest features like Blazor. It allows the development of client web applications with C#. And it eradicates the need for using Java. It is a server-side framework which is appropriate for making high performing multi-platform applications. Hence, there is simply no doubt about the fact that when it comes to the development part, a large variety of new things have been added.

A bit more about Blazor

The most wonderful benefit of using Blazor is that it makes it possible for the development experts to write the codes with the help of C#. It diminishes the need for using JavaScript. Basically, Blazor is a topnotch framework which is apt for developing interactive client-side web User Interfaces. At the same time, you can even render the user interface as CSS and even as HTML for greater browser support. In fact, the apps are perfect for mobile browsers as well. Additionally, with the help of Blazor, you can make the most of the current .NET ecosystem. At the same time, the .NET libraries can be utilized with Blazor.

It supports WPF as well as the Winforms APIs. Microsoft has tried its best to embed the classic desktop APIs in ASP.NET Core 3.0. In fact, compatibility is also worth talking about. Therefore, there are tons of advantages of switching the present apps to .NET ASP.NEW Core 3.0. If you port, then the deployment flexibility will be higher. Additionally, the core runtime will be enhanced. Additionally, there will be a lot of enhancement in the APIs as well as the performances.

You may like:  How to Secure the Email Portal of Office 365?

In the latest edition of ASP.NET Core, the developers will be able to build the apps with the help of Visual Studio. The support that Visual Studio offers has increased massively. Earlier, the developers were not using it for the development of apps. MSBuild was supported from v1.0. And, the developers had to only write project files manually. It was a tedious method. But now, Visual Studio has made the complete process a lot faster and much smoother for the engineers.

At the same time, when it comes to the help and the support needed to improve as a developer, ASP.NET Core has a big community. But, with the introduction of this new edition, the support will increase and the growing developers will be able to get more guidance as well as assistance whenever needed. As the popularity of ASP.NET Core 3.0 will increase, so will increase people’s curiosity to teach and learn, and thus, the support will increase. ASP.NET Core 3.0 is one of the latest versions, and there are host of new features that make it one of the best versions so far. A lot of people are already excited to adopt and use it. Simply, because it is making the complete process of developing web applications swift and smooth for the engineers. At the same time, the ease of re-engineering, maintenance, and the extensive support system makes the adoption of ASP.NET Core Development Services a lot more worthy. Thus, if you are planning to adopt .NET Development or if you want to build your career in this field, then in both cases, the future seems to be very very bright.

Why visit Thailand in 2021: 10 good reasons to convince you!

How to Boost Your Chances to Get High Mythic Keys?