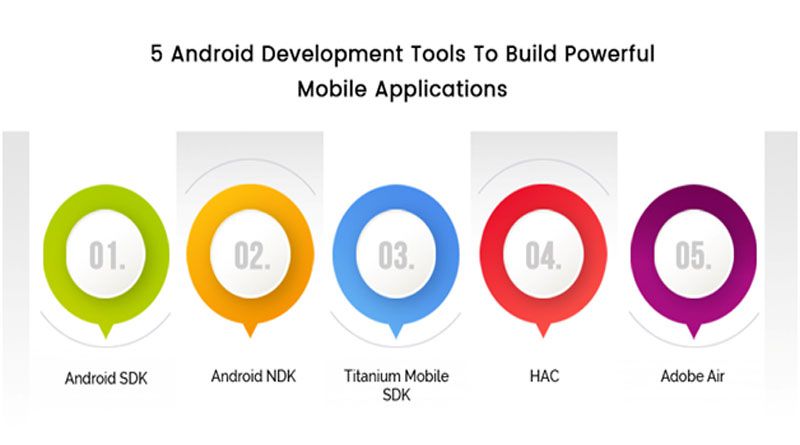 Android is a versatile open platform that is being used by millions of worldwide users. With its plenty of android development tools, Android developers can acquire a strong-skill set to build powerful apps outreaching the largest audience to accomplish sustainable growth and to support newer market penetration.

With eminent market adoption, Android development is comprising more than 74% market share whereas the iPhone is holding around 22% market share across the globe.

Considering the steadily evolving market ratio and user adoption, the Android platform is taking a lope in the smartphone world. Hence, numerous development platforms and toolkits are reserving their effective space for mobile app developers.

These tools are emerging to craft robust, intuitive, and highly navigational mobile apps affecting and impacting the users to stay engaged & drive the operational goals. So, this blog will embrace the top 5 Android development tools that are being used on a major level in app development agencies like Infoxen or adopted by independent Android app developers.

Hence, considering the market adoption, android developers can gain a grasp on these android development tools to build intuitive apps streamlining their workflow:

The Android SDK (Software Development Toolkit) comes with API libraries and essential developer tools to perform developing, testing, and debugging apps for the Android platform. This software development toolkit is the most sought-after SDK that is being used to develop Android applications in small to major levels of organizations.

Aspiring developers can take recourse of this SDK to build astonishing apps imbibing the Eclipse+ADT plugin, Android SDK tools, and Android platform-tools a few names to give.

The Android NDK is another powerful app development toolkit that enables developers to perform coding to implement distinct parts of their app with the use of native-code languages that incorporates C and C++. This app development tool is such a sturdy tool that also renders capability to the developers to reuse the existing code libraries that are coded in these languages.

But NDK also comprises a drawback that it does not demonstrate its support to most of the apps apart from native. So, developers are necessitated to gain balance over its drawback. Since native apps are not helpful to enlarge the performance but often seem to enhance complexity. Thus, it is propounded that consider developing with NDK when there is a generous need for your app as it limits you with C and C++ programming domains.

With the use of JavaScript, Titanium Mobile SDK offers a strappy caliber to the developers whereby they can design & develop native, responsive web, and rich hybrid applications addressing all the platforms utilizing a single code base.

With over more than 5000 APIs, this mobile development tool-kit enables app developers to create an immersive and engaging user experience within a lower time-frame compared to other native platforms.

You may like:  Know About Node.js Development - Tips and Best Practices

We also conclude some advantages of NDK as well in terms of flexibility limitation, user-experience, and complexity issues but still, Titanium is the first-ever choice to build remarkable Android and cross-platform apps development.

Hyper Next Android Creator is a tool that empowers developers to seamlessly and quickly develop android apps. These apps proffer reliable and extensive support to run on cross-devices smoothly and effectively.

HAC works based on HyperCard which considers software as a stack of cards whereby merely one card will be visible at a time hence, it will be quite considerable for those applications where a single-window operation is implemented. Also, the programming language is easier and simpler to perceive and implement.

Adobe Air is the next mobile app development kit that enables developers to package and implement the same code written previously into native apps whether for iPhone, iPad, Nook Tablet and other Android devices. These apps deliver smoothness and cross-compatibility to run and engage users.

These apps are built based on programming domains like HTML, CSS AIR, and Action Script embracing the capability to develop cross-platform mobile apps that are cost-optimized and time-saving.

Perceiving the industry trend, user-requirement, and evolving market exposure for Android app development, developers are taking recourse of Android development tools to design, develop, and deploy the cost-effective, time-compatible, and user-driven apps. Using these tools strengthen the developers to streamline their app development process and to render remarkable apps.

Hence, developers who are discerning about Android development tools can make use of these tools to gratify their skills set and develop substantial mobile and web apps.

Poonam Singhis a senior technical writer and content strategist at Infoxen Technologies. She treasures her idle time by keeping herself well read about dominant web technologies & their implementation.She’s passionate and enthusiastic to write on a multitude of technology domains for startups and continuously evolving enterprises.