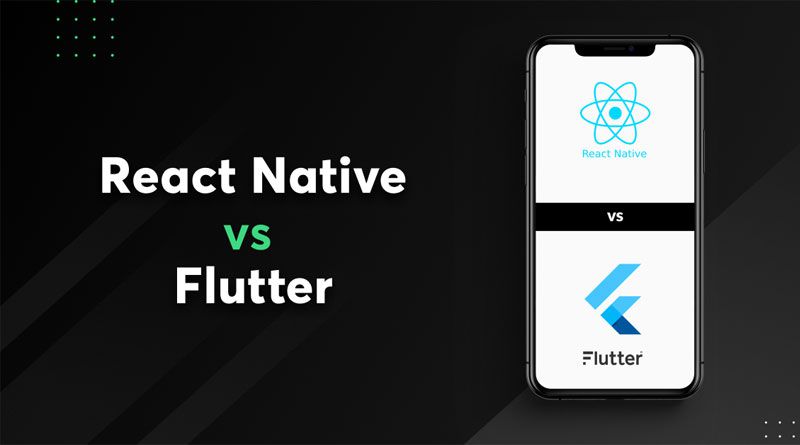 React Native and Flutter are the two major cross-platform development technologies in the market right now. 42% of software developers use React Native, while 39% of them use Flutter.

Both frameworks have their own benefits and limitations, making it difficult for developers to choose the right one.

To help you make the right decision, I have come up with a comparison article that helps you better understand the frameworks and the difference between the two. Let’s get started!

Flutter is a portable UI toolkit created by Google. It allows you to build applications for mobile, web, and desktop from single source code. Flutter consists of a complete software development kit (SDK), widgets, and tools.

Flutter uses the Dart programming language. Google launched Dart in 2011.AnyonefamiliarwithC,Java,orJavaScriptcaneasilyunderstand and write codes in Dart as it inherits many of the same expressions as otherlanguages.

Flutter provides widgets (that are built using a modern framework) to help you develop your UI. Here are the most common yet powerful widgetsused in Flutter:

Choose the right UI widget depending on what you want tocreate/edit (accessibility, animation, assets, layout, etc.).

Flutter aims to render 60fps (frames per second) performance. And, for the devices capable of 120Hz updates, it strives for 120fps performance.

Remember, for 60fps, the frame needs to be executed almost every16ms. If not, users will face issues in your app’s UI.

You may like:  Digital Payment innovation going to rule in 2021

What is React Native?

React Native is a framework created by Facebook used to create native applications. It allows you to develop Android, iOS, web, and UWPapps using React. It is supported by major companies, including Microsoft, Callstack, and Software Mansion.

Many iPhone app development companies prefer using ReactNative because of its native UI platforms. React Native has several UI components for everything you might need to build an app. However, you will mostly work with these five core UI components:

Just like Flutter, React Native aims to achieve 60fps and provide a native feel to your apps. Animations, multi-threading (or parallel processing), and navigation are some major elements that can hamper your React Native app’s performance.

Here’s a table that helps compare Flutter and React Native side by side.

You may like:  Best Ways to Tidy up your Multitasking Window on Android 101

Pros & Cons of Both App Development

Here are the pros and cons of both Flutter and React Native:

As you can see, React Native is a clear winner. However, if you (or your developers) know Dart, then Flutter is the right choice. If you are still not sure, consider hiring cross-platform developers. Their extensive knowledge of both React Native and Flutter can help you create an app that your customers will love.

Mr. Maulik Pandya is the founder & CEO of Evince Development – a software development agency committed to delivering innovative digital solutions. With over 8+ years of experience, Mr. Maulik has played a versatile role in development, marketing, and every other aspect surrounding web, mobile, and enterprise solutions.