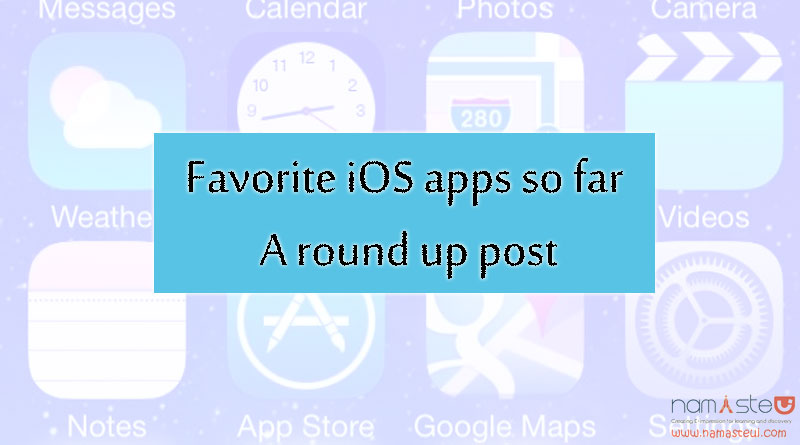 As we wind up 2017, we thought it would be a good idea to round up some of the best iOS apps that got a great deal of attention this year. Plenty of new iOS apps were released in 2017 but not all of them could attain the great laurels and glory they aspired for. But, some of them did make a mark and fared really well. In this article we take a look at some of the most favorite iOS apps so far. Not all these apps were necessarily released last year. Some of them are pretty old. But, they were downloaded so many times that we couldn’t have missed them. Take a look!

GarageBand is indeed one of the most popular music app on the iOS platform. It is not only a rage among the budding musicians but also chosen by a number of pro musicians. This app packs tons of tools and features that allow you to create incredible music. You can produce sounds from a number of instruments without having to own any of them physically. You can also connect your existing instruments to GarageBand and make use of some of the best effects. This is pretty much for the beginners. If you happen to be a seasoned musician, you will love the fact that GarageBand can easily connect to other professional apps (source). All in all, it is one awesome app to have if you love to create music. The best thing about GarageBand is that it is absolutely free without any in-app purchases. If you are looking for a somewhat professional (or semi-professional) photo editor for your iOS device without having to actually shell out a fortune, Afterlight 2 is what you would like to consider. This app packs all the basic features such as effects, filters, brightness, contrast controls, cropping and more. It also has advanced features including tone curves, hue and saturation control, custom presets and a lot more. Afterlight 2 also has a text tool, which I personally believe is pretty cool. The app lets you add your words to any image with incredible ease. You can use many fonts, text effects, styles and so much more. Afterlight 2 has a very nicely designed interface, which is not only easy to use but highly functional too. Afterlight 2 is not free. However, it is priced quite reasonably at $2.99.

You may like:  How To Find the Best Machine Transcription Equipment for Your Startup Needs Like to animate your photographs? Well, I am confident you will like Plotagraph+. One of the best things about this app is that it does not require multiple photographs to create a loop; you can create animated video using just one photograph. All you have to do is define the movement areas and mask those areas that are supposed to stay static. Using this app can get a bit complicated especially if you have a small screen. This is why it works best on iPad instead of iPhone. However, you may still use zoom and preview the animation so that you can do any fine tuning before producing the final copy. That’s not the only thing this app has to offer though; there are tons of other features that make your animation all the more exciting. And, the app does not demand a steep learning curve. You can have your animations ready in almost no time. Plotagraph+ is priced at $4.99. Pic Collage, as the name suggests, is an iOS app to create some fun collages. If you want to pick the best photos you have and make them even more special, here is the chance for you. While this app offers several layouts, we like the Grid the most. All you have to do is pick some of the photos and the app will organize them in a grid quickly. In case you don’t like the style, you can always change it. You can also change the position of the photos in the grid. The app also lets you add background to your collage. Pic Collage is not just a collage tool; it also doubles as a photo editor. Just tap any image twice within the app and you will be able to add many effects to it. The app also lets you add the stickers and text. In fact, you can even doodle over the image.

The app is free but the free version leaves a watermark on your exports. You can buy the app for $1.99 to get rid of the watermarks.

Pro Cam 5 is a camera app for the iOS devices including iPhone and iPad. This app brings to you loads of features and options to make your photographs look even more stunning. While so many options can easily overwhelm anyone, the app layout and design is such you are going to find it quite usable and simple. Pro Cam 5 is actually a pro camera app. It even lets you shoot in the RAW mode besides the traditional ones such as JPEG. It also allows you to shoot in HDR mode. The app also offers a number of shooting modes including night, burst, slow shutter and more. Pro Cam 5 also has many manual settings to change exposure, ISO, focus point and shutter speed. The app also has a built-in photo editor. You can buy this app for $4.99 from Apple’s App Store.

If you are someone who loves to explore the starry, night sky then Sky Guide AR could be a pretty solid app for you. Just point your phone camera at the sky and move your phone around. You will be able to see various comets, satellites, planets, stars and many celestial objects. Once the object appears in the sky, just tap on it and you can learn more about it. Sky Guide AR is definitely my favorite sky app. It has an incredible design which boasts of professionalism. It also has marvelous illustrations to get you even closer to the sky. What’s even more amazing about this app is that it works even during daytime. Well, if you can’t head out at night you can see the objects during the day as well. Sky Guide AR is priced at $2.99. Emojis have become an incredibly important part of our day to day communications on the digital platform. We use emojis every now and then while chatting with our friends and family or while posting updates on social media. Even though the IM and social media services offer a pretty decent collection of emojis, we can never have enough of them. That’s why making one’s own emoji sounds like such a good idea. You can create emojis using the templates or presets or you can start from the scratch. There are tons of shapes available to build upon. You can play around with the options and create exciting emojis of your own.

So, here is our list of the best apps so far. I hope you liked reading this article as much as I enjoyed writing it. These apps are indeed pretty good and user ratings and reviews are testimony to it.

Renuka Sharma, Is one of the writer who love to read and write about latest gadget and trending apps. She also loves to surrounded by the technology and cover wide range of technology changes. Rather than technology photography is another thing which attracts her.