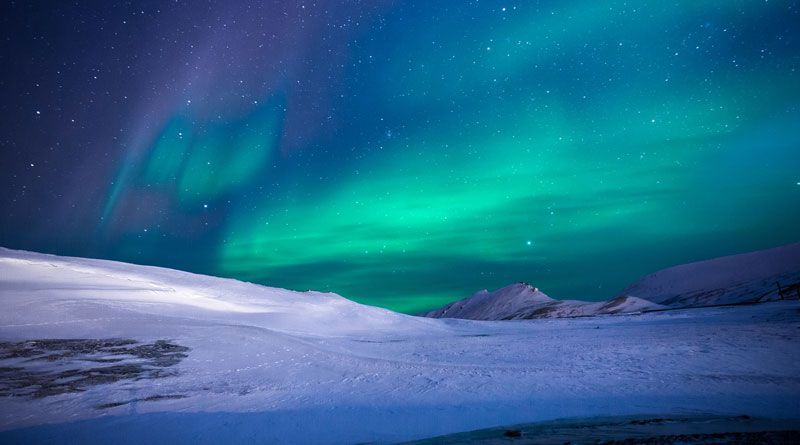 One of the most fascinating natural events in the world is the Northern Lights.

These glorious and colourful phenomena light up the skies of several countries in the Northern Hemisphere.

If you want to experience their magnificence, then look no further as this article will tell you about the best places in the world to see the Northern lights. Svalbard is one of the northern most places in the world and so it should be no surprise that it comes out at the top in our list.

This cold but beautiful island belongs to Norway and is located deep in the Arctic Circle.

That’s good news because the general rule is that the higher your latitude, the more your chances are to view the Northern lights.

Svalbard is home to an eerie phenomenon, the Polar Night which lasts from mid-November to the end of January. The dim persistent twilight of the Polar Night is great for viewing the aurora. The largest island in Svalbard is Spitsbergen, it is one of the best inhabited places to view the Northern lights.Some of the best places to stay there are the Coal Miners’ Cabins, the Radisson Blu Polar hotel which has the distinction of being the world’s northernmost full service hotel and lastly, Funken Lodge.

To get to Svalbard, you can take a flight from the United Kingdom to Oslo, and from there to Longyearbyen.

For Americans, Northern Canada is a little closer to home than Svalbard and you can get equally stunning views of the Aurora Oval here.

You may like:  Why December is the best time to visit Mussoorie

The Aurora Oval can be seen from a large section of the entire country and is best seen from Yukon, Northern Saskatchewan and British Columbia. After having a glimpse of the awe inspiring aurora, you can spend the rest of your time skiing or doing wildlife watching since Canada is famous for itsuntamed fauna.

Whitehorse is a place where every autumn, the night sky is bedazzled with the lights of the aurora and you can stay at tents, lodges beside pristine lakes, cabins or cottages.

You can also do indoor viewing of the aurora at Northern Lights centre, Watson Lake.

Anybody who loves nature will automatically appreciate Scotland, the queen of the hills.This beautiful place has some of the best views the world has to offer and among them are the Northern Lights. Scotland has quite a number of places with dark skies at a Northern latitude perfect for viewing the ‘Mirrie Dancers’ such as Shetland, Orkney and Caithness.Aberdeenshire and the Moray Coast are two other aurora hotspots.

Besides the aurora, Scotland has a lot more to offer in the form of winter activities in places like Aviemore and Cairngorms National Park.Cairngorms has several things you can do like mountain climbing or bike riding through the valleys and hills near Balmoral, the Queen’s Scottish home.

If you want snow, you can head up to Glenshee. Reykjavik is one of the most convenient and affordable locations to view the aurora. Reykjavik is soaring in popularity because besides the aurora, there are several wonderful things to see and do here likeviewing volcanoes, blue ice and geysers.

Iceland was also home to some of the Game of Thrones shooting areas and you can scout them out.

You may like:  A Guide for COVID-Safe Business Travel in 2022 One of the best attractions in Iceland is the Blue Lagoon Geothermal Spa which is toasty and warm all year round and can be easily accessed while going from the Keflavik airport to the capital.

Westfjords or Northern Iceland and the Öskjuhlíð forest are great for viewing the aurora too.

You can even visit parks such as the Klambratún or Laugardalur Park to have a comfortable view of the lights. We’ve saved the best for last, Kakslauttanen is the home of the glass igloos where you can lay down, relax and stare at the beautiful lights in the sky singing a song fit for the universe.

You could also stay in a wooden cabin with its own sauna and open fire.

If you are unable to see the lights, there is still a lot to do such as reindeer safaris or exploring the Urho National Park which is close to this place.

Santa’s home, Korvatunturi is just two hours away and you can reach it via dog sled!

These were our 5 best picks in the world to see the Northern Lights.We hope you enjoyed reading, got inspired and are already looking at flights in the other tab to reach one of these marvellous places.

Yogi and Suchna believe in taking the road less travelled and stumbling upon some hidden gems along the way! For over a decade, they’ve mapped their way across various continents, sniffed out unusual routes, discovered new flavours and stayed at quirky hostels. TheVillaEscape is their expression of soul travel. To check Northern Lights Iceland you can catch up with them at TheVillaEscape.