Skip to content
You May Like
WhatsApp backup from Android to iPhone? How to Do
A Guide for COVID-Safe Business Travel in 2022
Tips For Starting A Trucking Company 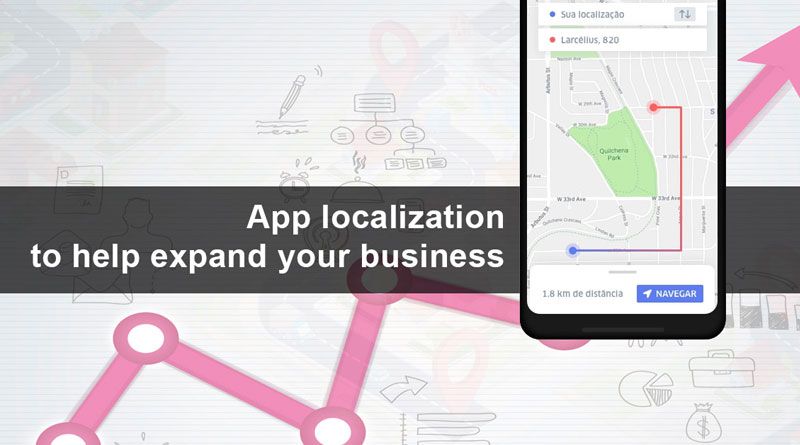 Smartphones are everywhere, and you see people around you engrossed in their devices. Their heads down, eyes squeezed giggling, surprised and satiating their curiosity. The human mind needs action, some fodder to keep it working, and with millions of mobile apps available in the app stores, there is plenty of food to keep the user busy.

App localization is an exciting concept that most businesses are exploring and have become an essential component if you want to succeed in a global market.

With so many apps vying for the user’s attention, it is becoming a hard task to make it stand out amongst the crowd. One way of differentiating your app is to design it in such a way that it appeals to a global group. While it is true that in this age of globalization, people have come closer, but still users tend to tilt towards localized apps.

Many mobile app developers from English-speaking countries tend to build their apps only in English. While it is true that the English speaking market is substantial, the app developers are just scraping the tip of the iceberg if they limit themselves to only English. China has emerged as a consumer mammoth in recent times, and the scenario is no different for mobile apps. Have a look at the graph given below.

As you can see amongst the top 5 countries, there is only one English speaking country USA. There is vast untapped potential lying in these countries which can be utilized, giving you a leg-up on the competition. Imagine the possibility if you could offer a Chinese language version of your app, the app downloads are bound to swell to mountainous heights!

Now that we know the advantages of localizing, let’s see which things to consider while localizing your app.

There are two versions of localization.

In one version localization is done in a way that only a minimum number of features which are absolutely essential are localized. This version is also known as the Minimum viable localization; in this version, the most important features of localization can be achieved without substantial investment and effort. The option is great when you want to take a more cautious approach towards localization and test the waters before taking the plunge.

In the second version of localization, we take a more detailed approach towards localization. Where the idea is to make the app localized in each and every aspect. Although the time and effort required to take this approach is bigger as compared to the previous one, it pays off in the long-run.

Analyze your data and find out from which international market are you getting your most users from. This is the place where you would like to start with, most probably this market would be much similar to your home market. Sometimes it happens that certain users are also well-conversant in another language, for eg:- Chinese customers living in US. A would love to have your app in Chinese. If you provide them this simple feature, then these customers can prove to be influential marketers for your brand as they would love to tell their friends and family about this ‘cool’ app which is now available in Chinese.

Another good reference point to identify the markets where your competitors are going? Remember that localization is a business decision and like any business decision it should be backed by good amount of research.

Start small and with familiar markets

First-time localizers can be overwhelmed with the amount of work it requires to localize an app correctly. It is a wise idea to start with markets which are more like your home market, for eg:- a US app developer can concentrate on U.K., Australia, and Canada first before going to China.

Some would wonder, “okay where is the localization part in here, you just have to change some spellings like from colour to color and everything is fine” well think again, what about converting the currency like dollars to pounds or Canadian dollars? What about cultural preferences? like if you are a news app then, the UK and Aussie customers would be much more interested in the life of Prince Harry than the US customers. Do not forget to change that date format the Brits write – day first and the month second.

Similarly, for a company based in Hong Kong it might be easier to focus on the Chinese market first.

Having the same alphabets, similar culture and user preferences help you in getting a taste of localization, you gain valuable experience which could be used in more challenging markets.

Another thing to keep in mind is that you should not try to ride two boats at once, try to focus on localizing for one market first and then approach the other market. This is especially important if you are a startup on a shoestring budget

Don’t get lost in translation

The translation seems to be the most basic aspect of localization, but it could go horribly wrong if not taken care. Most app developers make the mistake of relying on online translation tools like Google Translate. While they might seem enough, they are not especially in understanding the nuances of language.

A classic example of this would be the french word for Automobile, which is “Voiture” if your app is a car reviewing app and you decide to use the term “Voiture” you are up for a surprise. The French use the word “Auto” more often than “Voiture”.

To avoid such mistakes always hire professional human translators as they will understand the nuances of the language and would be well-versed with the local culture. For example when American Motors launched their famous “Matador” brand in Puerto Rico, they were up for a rude shock. In Spanish Matador means Killer and nobody would like to drive a car whose name is killer, would they? Another (in)famous example would be that of KFC, when they entered China, the Chinese translation went horribly wrong. The Chinese customers read, ”eat your fingers off”, instead of the company’s famous tag line,” Finger-lickin’ good”.

You may like:  Common Network Security Risks and How to Overcome Them

Another important thing to consider in language translation the direction of the text. In Arabic, the text is read from right to left hence the meaning of your message can get changed drastically if proper care is not taken. In such a scenario it is a good idea is to flip the whole design.

Translation errors can go awry and harm your reputation on a global level faster than you imagine. It’s better to invest a few dollars into hiring a professional local translator than to take the risk.

You are entering a new market with your app, hence it is essential that you take into consideration the local laws.

Also in China, you are required to partner with a local company. It would be wise to have your app hosted on a local server or a server hosted in Hong Kong, Singapore, Indonesia or Malaysia. Also you need to cater content of your app according to the government regulations to avoid the infamous “Great Firewall of China”.

At times there are technical considerations like in china although it is possible to encode in ISO-2022-CN, ISO-2022-CN-extension, EUC-CN,  or G.B.K., it’s Good to encode in Unicode(UTF-8) as it is the only code which supports all the Chinese characters.

Access to electricity is also a cause of major concern in many developing countries of South-east Asia, Africa, and South America. Your app should be prepared to address these challenges, by providing an offline mode and also by being data efficient.

It is especially important to conduct thorough testing of your localized app to avoid goof-ups. For example, check whether the fonts are looking the same way on all versions of Android and iOS and on all screen sizes. It is a good idea to test your app on devices which are most popular in your target market. Make sure that there are no functions in your app that are contradicting to the hardware available with your users. Consider doing functional and linguistic testing to eliminate any errors in your app.

Conclusion Mobile app localization helps your app by expanding its reach to different markets. Customers of these countries love it when a business takes the pain of catering their offering according to local taste. This is sure to drive loyalty.

Ashish Parmar is the CEO of Prismetric – one of the reliable Mobile App Development Companies. An enthusiastic entrepreneur, interested to discuss new app ideas, rich gadget tricks and trends, and admires signature tech business styles to readily embrace. He enjoys learning modern app crafting methods, exploring smart technologies and passionate about writing his thoughts too. Inventions related to mobile and software technology inspire Ashish and he likes to inspire the like-minded community through the finesse of his work.

One thought on “How to get App localization right?”