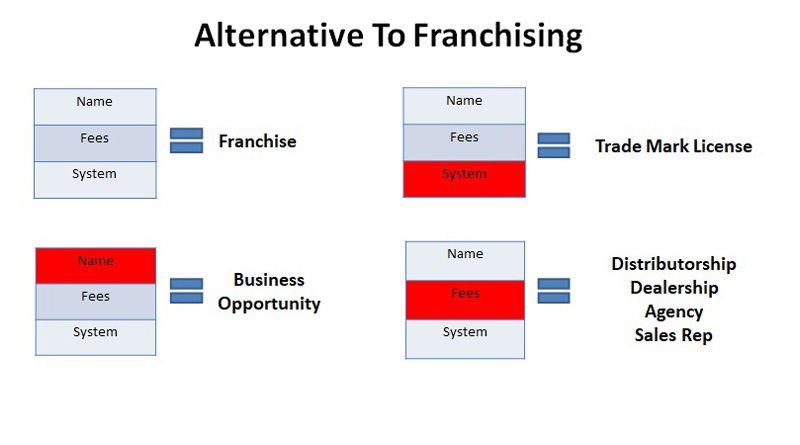 In the business world, there are several ways to earn lucratively. Four of them have been named in the above figure. However, myriads of people do not know the distinctions among them or often confuse one with another. To begin with, let it be cleared from the get go only that each of these terms have a place, meaning and scope of its own in the business world.

Franchising is a method of distribution and marketing wherein the owner of a business system/brand (Known as franchisor) grants the right to run a business selling a product or providing a service using the franchisor’s business system to an individual or group of individuals (known as franchisee). In sum, “franchise” is the contract binding the two parties while the exercise of creating and distributing the brand and franchise system are referred as franchising.

In franchising, as you can see in the given image, franchisor provides you with the brand name (along with the brand’s reputation and goodwill) and business system to be followed. While, you as a franchisee, pay a royalty and often an initial fee for the right to do business under the franchisor’s name and system.

You may like:  What are the Benefits of Going Globally for Business Expansion?

Trademark License, to put simply, refers to the permission granted by the owner of the trademark to a third person. The license is granted in consideration of a Royalty. To explicate it more, in a Trademark Licensing agreement, the proprietor (known as Licensor) of a registered trademark gives authorization to another company (known as Licensee) to manufacture and distribute products under the same trademark.

The license is given for a specific range of products for which the licensee acquires exclusivity in a distinct territory (usually a country). The licensee pays a certain amount of money and royalties to the licensor, in exchange for the rights granted. The image attached over here explains the same symbolically.

A business opportunity is a packaged business investment allowing the buyer to begin a (certain) business. Unlike a franchise, with most business opportunities, you would simply buy a set of equipment or materials, and then you can operate the business any way and “under any name” you want.

Let’s come down to distributorship. Distributorship law is concerned with the supply chain existing during certain business arrangements. In distributorship, distributor is one who buys products from a supplier, warehouses them, then sells them to retailers or to end-use customers.